In the Canadian boreal forest, jack pine stands generally have a thin forest floor and occupy sites with coarse-textured soils and good drainage. Black spruce occurs more often on poorly drained sites and develops a thick moss-dominated forest floor, but the common attribution of this development to poor quality of black spruce foliar litter has not been tested. We determined needle, twig, cone, and bark litter inputs during 10 y for black spruce and jack pine along the Boreal Forest Transect Case Study in northern Saskatchewan and Manitoba. Analysis of C, N, total phenolics, condensed tannins, and solid-state 13C NMR spectra from years 1–3 showed only small differences between species, notably higher tannins in black spruce cones. There was similarly little difference between area-based inputs, including classes of C structures determined by NMR. Condensed tannin input for black spruce was approximately twice that for jack pine, but both were in the very low range of reported values. Similar analyses showed that black spruce forest floor was less decomposed than that of jack pine, and for both species, aromatic litter C inputs appear to be poorly conserved, with a large influence of mosses and lichen. It is unlikely, however, that these large differences are mainly due to the small differences in above ground litter inputs.

Improved representation of dead organic matter has long been identified as one requirement for enhancing the capability of the Carbon Budget Model of the Canadian Forest Sector (CBM-CFS3). Already in 2001, we started a multiyear PERD project on C stocks and fluxes in black spruce and jack pine stands along the Canadian Boreal Forest Transect Case Study in northern Manitoba and Saskatchewan. Complementing detailed information on annual litter mass inputs determined over 10 years (Bhatti et al., also in this issue), we characterized litter quality and determined annual inputs of C, N and key organic components in needles, twigs, cones and bark flakes. Measures of “litter quality”, often based on dubious chemistry, are often used to predict decomposition rates, and black spruce has been accused of having “poor quality” litter which impedes decomposition and nutrient cycling. In fact, we found only minor differences in concentrations and area-based inputs. This supports the increasing realization that contrasting forest floor thickness and nutrient cycling between these species are more likely due to differences in soil texture, and the ability of black spruce to grow on poorly drained sites, supporting the science basis of model development. 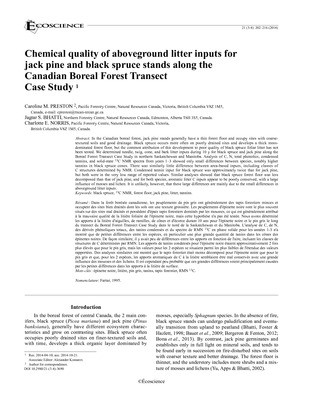