Male insects must find and mate females to have some descendants; male fitness therefore depends on the number of females they inseminate. Males are for this reason expected to optimize the behaviors related to mate location, orientation and copulation. Although optimization of the reproductive behavior of males has long been neglected in the literature, recent studies suggest a renewed interest for this idea. Here we discuss the parallel between male mate-finding and mating strategies in insects and optimal foraging theory (OFT), a class of models which formalize the behavior of organisms seeking and exploiting resources, generally food. We highlight the different facets of male mating systems allowing such a parallel, and claim for a unifying approach of foraging behavior. Finally, we discuss novel research perspective emerging from the application of OFT to male reproductive behavior.

In this study, the researchers compared the search for mating partners and the mating strategies of male insects with their foraging strategies.

In order to ensure the survival of their species, male insects must first find females. In addition, the number of offspring will depend on the number of mated females. For this reason, males seek to optimize their skills in finding partners and mating. Very few studies have focused on the optimization of breeding behaviours. 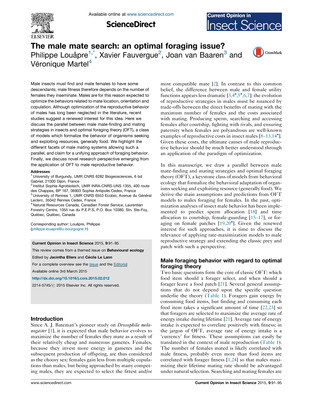