Changes in the carbon (C) balance of boreal forest ecosystems may impact the global C cycle and climate. The degree to which antecedent temperature regime and mineral protection of soil organic matter (OM) influence the temperature response of boreal soil C pools remains unknown, however. To investigate these phenomena on time scales relevant to anthropogenic climate change, we quantified the temperature response of four soil C pools (L, F and H organic horizons and B mineral horizon) within soil profiles collected from replicated sites representing two regions along a climate transect (“regional warming”) during a 480-day incubation at 5 and 15 °C (“experimental warming”). We hypothesized that 1) warmer region soils would exhibit reduced bioreactivity, a measure of C lability assessed via cumulative soil C mineralization, relative to colder region soils, paralleling a decrease in bioreactivity with depth in both regions, and 2) temperature sensitivity of C mineralization (denoted as Q10) would increase with decreasing bioreactivity congruent with the “C quality-temperature” (CQT) hypothesis, with a smaller effect in mineral soil where physico-chemical protection likely occurs. Cumulative C mineralization decreased from surface L to deeper horizons and from the cold to warm region for organic F and H horizons only. This decrease in soil bioreactivity with depth was paralleled by an increase in Q10 with depth as expected, except in mineral soil where Q10 was similar to or lower relative to the overlying organic layer. The lower bioreactivity in F and H horizons of the warm relative to the cold region was not, however, associated with a greater Q10. A warmer regional climate in these otherwise similar forests thus resulted in reduced bioreactivity of isolated soil C pools without increasing the temperature sensitivity of soil C mineralization. This suggests that assumptions about temperature sensitivity of C mineralization based on the propensity for isolated organic C pools to undergo mineralization may not be valid in some organic-rich, boreal forest soils.

The results of this study show that a rise in temperature accelerates the decomposition of soil organic matter in boreal forests, thereby increasing carbon release.

Faster decomposition could also affect the global carbon cycle. Indeed, if decomposition (carbon source) speeds up and is not mitigated by an increase in forest productivity (carbon sink), the amount of carbon emitted by these forests could increase. 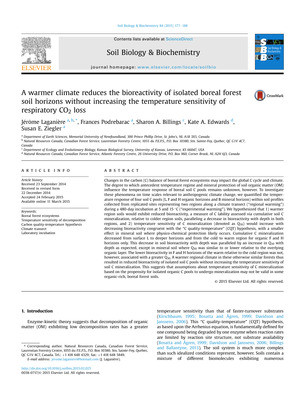