Plant cells secrete a wide range of proteins in extracellular spaces in response to pathogen attack. The poplar rust-induced secreted protein (RISP) is a small cationic protein of unknown function that was identified as the most induced gene in poplar leaves during immune responses to the leaf rust pathogen Melampsora larici-populina, an obligate biotrophic parasite. Here, we combined in planta and in vitro molecular biology approaches to tackle the function of RISP. Using a RISP-mCherry fusion transiently expressed in Nicotiana benthamiana leaves, we demonstrated that RISP is secreted into the apoplast. A recombinant RISP specifically binds to M. laricipopulina urediniospores and inhibits their germination. It also arrests the growth of the fungus in vitro and on poplar leaves. Interestingly, RISP also triggers poplar cell culture alkalinisation and is cleaved at the C-terminus by a plant-encoded mechanism. Altogether our results indicate that RISP is an antifungal protein that has the ability to trigger cellular responses.

This study showed that a protein secreted by poplars following infection by the European poplar rust fungus has antifungal characteristics.

The function of the protein was previously unknown. It was identified in a study of poplar leaves’ response to rust infection. Researchers found that the protein stopped the germination of fungal spores on poplar leaves.

The study of this protein could result in a better understanding of the defense mechanisms developed by poplars to protect themselves against this exotic pest. 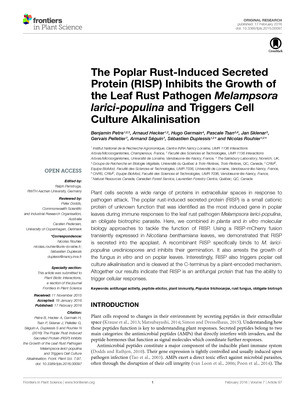