Throughout much of the northern temperate and boreal forests of Canada, intensifying silviculture to enhance fibre production is of increasing interest. However, some oppose the application of intensive silviculture, citing possible negative effects on biodiversity. Using fifth-year post-harvest data from the NEBIE Plot Network in Ontario, Canada, we studied the relationship between plant diversity, silviculture intensity, and contemporary climate. Neutral, linear (positive and negative), exponential (positive and negative), quadratic (concave up and concave down), cubic, and higher-order models were fit to the data. Here we discuss the potential influence of climate and silviculture on observed biodiversity patterns. As well, we address their effects on regional species pools, succession, hierarchical structure, invasibility by exotic species, and species resilience.

This study analyzes the type of relationship between plant biodiversity and the intensity of the silviculture performed in Ontario’s northern temperate forest and boreal forest. 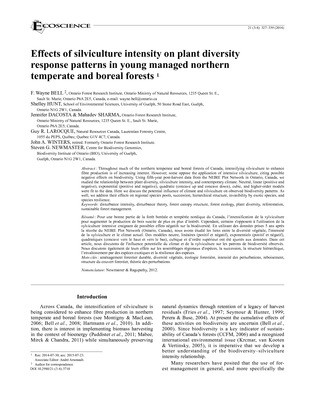