The oviposition behavior of the Indian meal moth, Plodia interpunctella (Hübner) (Lepidoptera: Pyralidae), a major insect pest of durable stored foods, was studied in small experimental arenas under laboratory conditions using videography, and a time budget analysis of its behaviors was documented. Resting gravid females typically became active shortly after the start of the scotophase. The characteristic behaviors exhibited by mated females prior to oviposition included antennal movement, grooming of antennae and mouth parts using the forelegs, walking or flying, and abdomen bending and dragging. Pre-oviposition behaviors such as antennal grooming and walking or flying were observed to alternate several times before females commenced the abdominal dragging behavior that preceded egg laying. Eggs were laid singly or sometimes in groups, either freely or stuck to food material. Gravid females showed little or no movement during the photophase; however, they actively flew and oviposited during the scotophase. Females allocated only a small portion of their time to oviposition while the rest of the time was spent away from food. Females oviposited on food material by making repeated visits, predominantly during the first four hours of the scotophase. Visits and time spent on food declined as the scotophase advanced.

Making simple changes in the way food is stored in warehouses could reduce the oviposition and egg survival rate of the Indian meal moth, a harmful pest.

The objective of this study was to observe the behaviour of females preparing for oviposition. Based on their observations, researchers recommended simple methods of intervention, such as shaking the grain containers or bags, to decrease the survival rate of Indian meal moth eggs. They also determined the optimal period for using insecticide.

The Indian meal moth is a major insect pest of stored foods throughout the world. 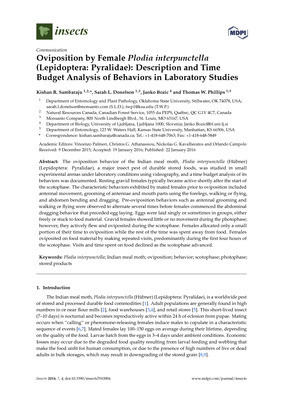