It is becoming clear that fires in boreal forests are not uniformly stand-replacing. On the contrary, marked variation in fire severity, measured as tree mortality, has been found both within and among individual fires. It is important to understand the conditions under which this variation can arise. We integrated forest sample plot data, tree allometries and historical forest fire records within a diameter class-structured model of 1.0 ha patches of mono-specific black spruce and jack pine stands in northern Québec, Canada. The model accounts for crown fire initiation and vertical spread into the canopy. It uses empirical relations between fire intensity, scorch height, the percent of crown scorched and tree mortality to simulate fire severity, specifically the percent reduction in patch basal area due to fire caused mortality. A random forest and a regression tree analysis of a large random sample of simulated fires were used to test for an effect of fireline intensity, stand structure, species composition and pyrogeographic regions on resultant severity. Severity increased with intensity and was lower for jack pine stands. The proportion of simulated fires that burned at high severity (e.g. >75% reduction in patch basal area) was 0.80 for black spruce and 0.11 for jack pine. We identified thresholds in intensity below which there was a marked sensitivity of simulated fire severity to stand structure, and to interactions between intensity and structure. We found no evidence for a residual effect of pyrogeographic region on simulated severity, after the effects of stand structure and species composition were accounted for. The model presented here was able to produce variation in fire severity under a range of fire intensity conditions. This suggests that variation in stand structure is one of the factors causing the observed variation in boreal fire severity.

In this study, the researchers created a model capable of simulating a variation in fire severity according to different conditions of fire intensity in the boreal forest. They believe that this variation stems from changes in stand structure, among other causes.

The purpose of this study was to explore and quantify the effects of stand structure, their composition and their location on fire severity. The research focused on black spruce and jack pine stands, the two most abundant and dominant species in the boreal forest. 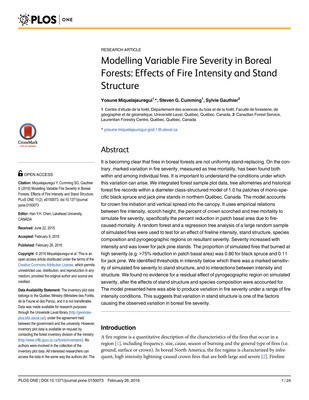