In forest management surveys, the mean of a variable of interest (Y) in a population composed of N equal area spatial compact elements is increasingly estimated from a model linking Y to an auxiliary vector X known for all elements in the population. It is also desired to have synthetic estimates of the mean of Y in spatially compact domains (forest stands) with no or at most one sample-based observation of Y. We develop three alternative estimators of mean-squared errors (MSE) that reduce the risk of a serious underestimation of the uncertainty in a synthetic estimate of a domain mean in cases where the employed model does not accounts for domain effects nor spatial autocorrelation in unobserved residual errors. Expansions of the estimators including anticipated effects of a spatial autocorrelation in residual errors are also provided. Simulation results indicate that the conventional model-dependent (MD) population-level estimator of variance in a synthetic estimate of a domain mean underestimates uncertainty by a wide margin. Our alternative estimators mitigated, in settings with weak to moderate domain effects and relatively small sample sizes, to a large extent, the problem of underestimating uncertainty. We demonstrate applications with examples from two actual forest inventories.

It has become a common practice to estimate the uncertainty in a stand-level LiDAR based prediction of stem volume or biomass with an estimator tailored to a population level estimate. The consequence is that uncertainty is grossly underestimated and leaving the user with undue optimistic assessment of the capability of LiDAR in the context of a forest management inventory. This study proposes three alternative estimators of uncertainty that performs significantly better in the sense of providing more realistic estimates of uncertainty. The anticipated impact is that our proposed estimators will be used for stand level inventories in favor of an incorrect use of a population-level estimator of uncertainty. 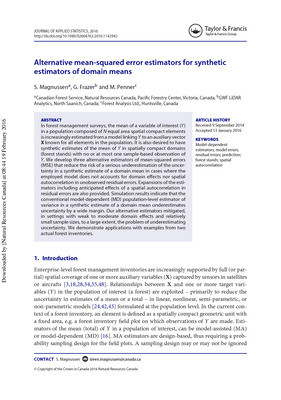