Forest management activities, such as tree thinning, alter forest ecology, including key components of forest ecosystems, including fungal communities. In the present study, we investigate the effects of forest thinning intensity on the populations and structures of fungal soil communities in the Cryptomeria japonica forests of central Taiwan as well as the dynamics of soil fungi communities in these forests after a thinning disturbance. Although the populations of soil fungi significantly increased in the first 6 months after thinning, these increases had subsided by 9 months. This pulse was attributed to a transient increase in the populations of rapid colonizers. A multiple regression analysis positively correlated fungal populations with organic matter content and cellulase activity. Thinning initially provided large amounts of fresh leaves and roots as nutrient-rich substrates for soil fungi. Denaturing gradient gel electrophoresis (DGGE) profiles indicated that soil fungal communities significantly differed among plots with 0% (control), 25%, and 50% tree thinning in the first 21 months post-thinning, with no significant differences being observed after 21 months. The fungal communities of these forest soils also changed with the seasons, and an interactive relationship was detected between seasons and treatments. Seasonal variations in fungal communities were the most pronounced after 50% tree thinning. The results of the present study demonstrate that the soil fungi of Taiwanese C. japonica forests are very sensitive to thinning disturbances, but recover stability after a relatively short period of time.

This study examined the way tree-thinning affects the important underground fungal communities in forest soils, using the Japanese Red Cedar forests of central Taiwan as an example. Because underground communities of fungal species are important for nutrient cycling and fertility of forest soils, the objective of the study was to understand how forest management methods like tree-thinning might affect these fungi. DNA profiles were used to follow changes in these fungal communities over time, at forest sites in central Taiwan, after various levels of thinning were applied to stands of Japanese red cedar trees. Thinning caused very substantial changes in the fungal communities, which were clearly sensitive to tree removal. Seasonal variation also caused differences. However, the composition of these changed fungal communities quickly recovered from thinning to be stable and show little difference from untreated sites. 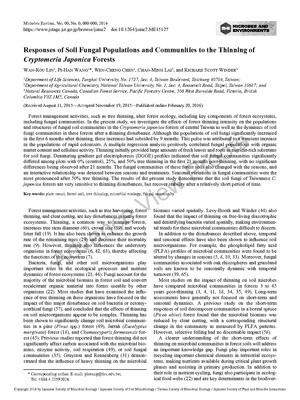