Wood ash may be an effective soil amendment in North America to restore acidified and low-nutrient forest soils, but little research exists beyond its effects on soil and plants. Eastern Red-backed Salamander (Plethodon cinereus (Green, 1818)) abundance was assessed in a northern hardwood forest 1 year following an ash-addition field trial. Plots were established with fly ash and bottom ash treatments of 0, 1, 4, and 8 Mg·ha−1 (n = 4), and cover boards were positioned both with and without ash beneath. One year following ash additions, salamander abundance had increased under boards with fly ash beneath, and bottom ash had no effect. Soil pH and electrical conductivity increased under cover boards with ash beneath them and for uncovered soil, and the effects were strongest under cover boards with ash beneath. The effects of ash were generally stronger at higher dosages, and fly ash was stronger than bottom ash. The moisture holding capacity of fly ash was 60% higher than the soil and was 63% lower than the soil for bottom ash, but they had little effect on moisture of the forest floor. These results suggest that ash altered salamander abundance via soil pH and moisture and would not inhibit salamander movement over the forest floor.

Ash from the burning of woody biomass was added to hardwood forest soils in a field experiment to determine the impact on soil pH, electrical conductivity and moisture, and salamander abundance one year after addition. The experiment utilized fly and bottom ash applied at three different rates. Salamanders were surveyed under cover boards with and without ash underneath. Fly ash had higher calcium and potassium concentrations, and a higher moisture holding capacity than bottom ash. Amending soil with fly ash increased soil pH, electrical conductivity and salamander abundance. Bottom ash had no significant effect on soil properties or salamander abundance. Fly ash increased salamander abundance through changes in soil acidity and moisture and did not prevent their movement on or through the forest floor. 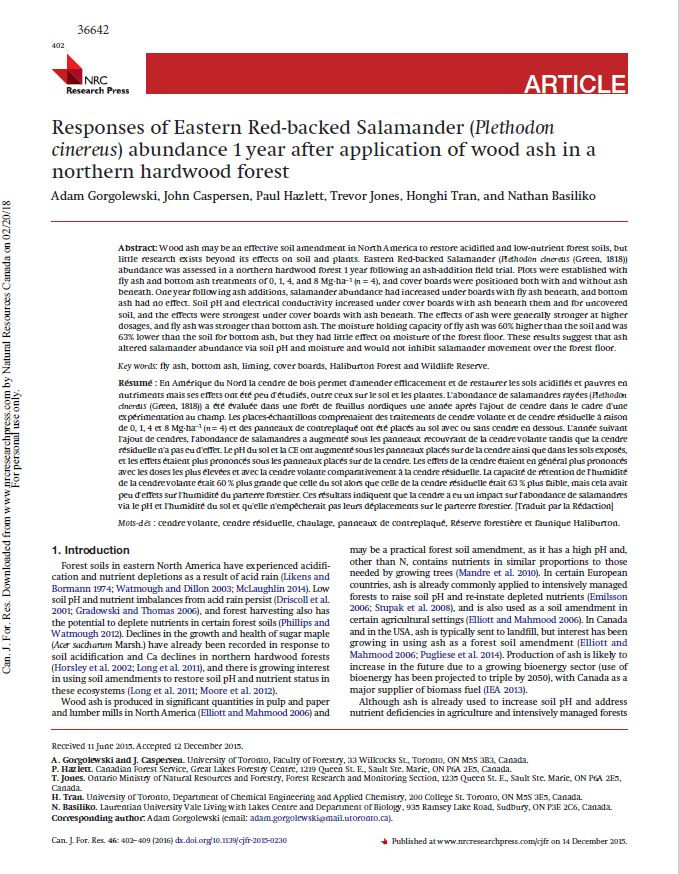