Recreational property (cottage) owners represent a growing segment of population living at the wildland–urban interface. Land managers may find it particularly difficult to engage these landowners in wildfire management initiatives. This paper examines support for wildfire management, perceived wildfire risk and wildfire mitigation actions among cottage owners in Cypress Hills Interprovincial Park-Alberta. Data were collected from 165 cottage owners using a mail survey. Results showed that these owners had a high level of support for fuel reductions on the landscape and a high level of interest in participating in a cooperative wildfire mitigation program; they had taken action to reduce their risk. However, they seemed reluctant to do substantial tree pruning, or to install fire-resistant siding or screen eaves, decks and vents. Results found that perceived risk was not correlated with mitigation action. Awareness, perceived effectiveness of firefighters, days spent at the cottage and value of the cottage were correlated positively with mitigation action, whereas perceived efficacy, aesthetic effects and cost of mitigation were correlated negatively. These findings suggest that mitigation programs for cottage owners may be effective by providing public education on the efficacy of mitigation, lessening the effects of impediments such as cost, and alleviating concerns about aesthetics.

Recreational property owners represent a growing segment of population living in or near forested areas. Most recreational properties are occupied seasonally (as summer cottages), during the periods of highest wildfire risk. Like other communities in forested areas, recreational properties at risk from wildfire can put increased demands on firefighting services and pose a risk to human life. However, cottage owners’ perceptions of wildfire risk and actions they can take to reduce the threat (mitigation) are poorly understood. This study examined support for wildfire management, perceived wildfire risk and wildfire mitigation actions among cottage owners. We used a mail survey to collect data from cottage owners in Cypress Hills Interprovincial Park-Alberta. The survey findings show that cottage owners in the study area consider their property and the surrounding landscape to be at risk from wildfire. Many are reducing their risk through a variety of actions, including removing fine fuels, trees and other vegetation. However, they seemed reluctant to do substantial tree pruning or make substantial changes to their cottage. Mitigation actions were greater with higher awareness and perceived risk, and lower aesthetic effects and cost. This suggests that mitigation awareness programs developed for homeowners (such as FireSmart) may also be effective for recreational property owners. 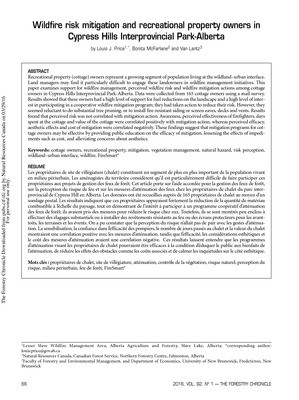