The introduction and establishment of non-native plant pathogens into new areas can result in severe outbreaks. Septoria leaf spot and canker caused by Sphaerulina musiva is one of the most damaging poplar diseases in northeastern and north-central North America. Stem and branch cankers can be devastating on susceptible trees, leading to tree death and reduced biomass in commercial plantations. In the Pacific Northwest region of North America, the first report of the disease was made in 2006 in the Fraser Valley of British Columbia (BC), Canada. To investigate the incidence and distribution of S. musiva from its point of introduction into BC, five plantations of Populus trichocarpa (black cottonwood), 500 P. trichocarpa trees from natural populations, and 23 plantations of hybrid poplars were surveyed by using real-time PCR assays targeting S. musiva and its native sister species, S. populicola. Our survey suggests a strong anthropogenic signature to the emergence of the non-native S. musiva. Detection frequency of S. musiva was high in hybrid poplar plantations (116 trees infected, 54.2 % of the sampled trees), while detection of the native S. populicola was limited to 13.1 % (22 trees infected). By contrast, in natural stands of P. trichocarpa, less than 2 % of the trees were positive for S. musiva (7 trees) while ~75 % were positive for S. populicola (433 trees). All the S. musiva detections in natural stands of the native P. trichocarpa were from trees located in the vicinity (<2.5 km) of hybrid poplar plantations. Identification of the genotypes found in the hybrid poplar plantations revealed that they are in majority F1 progeny from P. trichocarpa X P. deltoids (T X D) (82 %) and P. nigra X P. maximowiczii (N X M) (7.8 %) crosses, which are generally susceptible (intermediate level of susceptibility between the two parental species) to the canker disease. Our results suggest that the emergence of S. musiva in BC is related to the planting of susceptible hybrid poplars. Even if the disease has not yet established itself in natural poplar populations outside of the Fraser Valley, infected plantations could act as a reservoir that could promote its spread into nearby native P. trichocarpa populations.

The results of this study suggest that human activities (including hybrid poplar cultivation) affect the introduction and spread of the Septoria musiva fungus, which causes leaf spots on poplars, in British Columbia.

The purpose of this study was to identify and map the presence of the fungus in natural black cottonwood stands and in hybrid poplar plantations in British Columbia. The researchers also wished to examine the possible existence of a relationship between the genetic profiles of the poplars studied and their sensitivity to the disease. The ultimate goal of the research was to use the data collected to assess the risk that the fungus could spread beyond the hybrid poplar plantations, thereby becoming a threat to natural black cottonwood stands.

Exotic diseases are often introduced as a result of human activities, such as the transport of goods over long distances, the homogenization of forests and agricultural areas, and the large-scale planting of exotic plant species in urban settings. 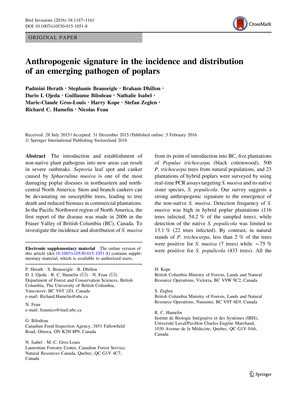