A new species, Anomognathus athabascensis Klimaszewski, Hammond & Langor, sp. n., and nine new provincial records including one new country record of aleocharine beetles are presented for the province of Alberta. Diagnostics, images of habitus and genital structures, distribution, natural history information and new locality data are provided for the newly recorded species. A checklist for all recorded aleocharines from Alberta is updated.

In this article, the researchers describe a new species of Anomognathus and nine new occurrences of this type of insect in Alberta. The article also includes an identification key for these beetles, as well as photos and facts about their habitat.

Taxonomy is a science which classifies living organisms. Insects are grouped according to different orders, which are then subdivided into families, genera and species. Taxonomy is namely used in biodiversity studies or in assessments of human activity impacts on forest ecosystems. 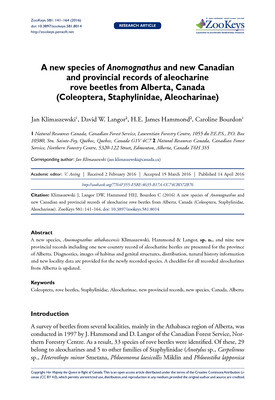