Mapping peatland extent in Canada would contribute important information concerning carbon balance and hydrology. While such mapping, based on air photo interpretation and remote sensing data, has recently improved, maps have been limited to 1:1 million scale. We hypothesized that forest structure information from forest inventory plots could be used to predict the presence of forested and treed peatlands in boreal Canada at the ground plot-level, and that a resulting model could be used to predict the distribution of forested and treed peatlands across Canada. Inventory ground plots from the Canadian National Forest Inventory (NFI) with organic soil depth measurements were used to create a model of the presence of treed to forested (canopy cover ranging from sparse to closed) peatlands (greater than 40 cm organic soil depth) in boreal Canada. The presence of black spruce (Picea mariana) or larch (_Larix laricin_a), in combination with low stand height and stand age greater than 75 years, were the strongest predictors of the presence of peatlands. Bioclimatic variables related to high diurnal and annual temperature variation, consistent with a continental climate, also contributed to the increased predicted presence of treed peatlands. Both logistic and boosted regression tree models showed similar results, with ~87% accuracy in the discrimination of treed peatlands when validated against an independent set of ground plots. The boosted regression tree model was propagated across Canada using forest attribute raster data layers at 250 m resolution from the NFI along with bioclimatic layers. Estimates of treed peatland extent agreed with data points from peat cores with 85–95% accuracy in the Boreal Shield ecozone, although prediction was less accurate in the more southern boreal and Great Lakes forest areas. The resulting map can be used as an input to forest carbon modelling, and the improved knowledge of treed peatland extent will be useful in modelling wildfire or peatland drainage.

Organic soils in the boreal forest commonly store as much carbon as the vegetation above ground. While we have good maps of trees across the vast area of Canada’s boreal forest, organic soils are poorly mapped. In this paper, we produce a map of the deepest organic soils, called “peatlands,” which are more than 40 cm deep. Peatlands without trees are usually mapped with aerial photography, but peatlands with forest cover (called “treed peatlands”) are difficult to map from the air. We wondered whether we could use existing maps of trees instead to tell us where treed peatlands are found. First, we used attributes of stands of trees, such as the proportion of black spruce and larch trees, stand height, and stand age, at ground plots measured as part of the National Forest Inventory, to predict whether a site has more than 40 cm of organic soil. Next, these predictions were applied across the entire boreal forest using an existing set of maps of the same stand attributes in our ground plot model. This has created the first high-resolution maps of treed peatlands across Canada. The method used here and the data we produced provide a much-needed map of these high-carbon ecosystems. These maps can be used to understand the amount of carbon in Canada’s forests and to predict wildfire and effects of forest harvesting. 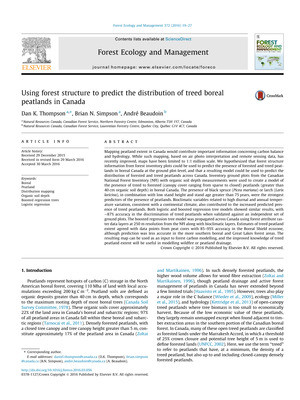