The current capacity of northern high-latitude forests to sequester carbon has been suggested to be undermined by the potential increase in fire and insect outbreaks. Here we investigate the response of the terrestrial ecosystems in the province of British Columbia (BC), Canada, to the recent large mountain pine beetle (MPB) outbreak that started in 1999 as well as changing climate and continually increasing atmospheric CO2 concentration up to 2050, in a combined framework, using a process-based model. Model simulations suggest that the recent MPB outbreak results in BC’s forests accumulating 328 Tg less carbon over the 1999–2020 period. Over this same period changing climate and increasing atmospheric CO2 concentration, however, yield enhanced carbon uptake equal to a cumulative sink of around 900–1060 Tg C, depending on the future climate change scenario, indicating that the reduced carbon uptake by land due to the MPB disturbance may already be surpassed by 2020.

Forests play a very important role in the global carbon cycle. During times of disturbances, they can become carbon sources, and during times of regrowth carbon sinks. This study assessed the impacts of the Mountain Pine Beetle (MPB) and climate change on the carbon dynamics in British Columbia’s forests. The paper reports the results of the application of a new modelling approach that takes into consideration forest growth responses to changes in climate and atmospheric carbon dioxide concentration under three future scenarios of climate change to 2050. The study suggests that the growth-enhancing impacts of environmental changes have, on average, been positive and by 2020 will be strong enough to have compensated for the carbon losses from MPB. While many caveats and uncertainties remain, this study highlights that not all impacts of climate change on forests in Canada will be negative. Therefore understanding the regional distribution of positive and negative responses will be essential for the successful design of climate change mitigation and adaptation strategies in BC’s forest sector. 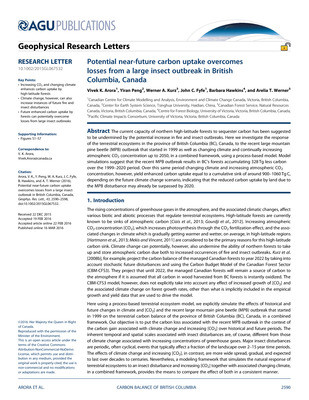