Permafrost is an important ground thermal condition that has significant biophysical and socio-economic impacts. In order to better understand the distribution and dynamics of permafrost, there is a need to map permafrost at high spatial resolution. This study is part of a research project that aims to model and map permafrost using remote sensing images and the Northern Ecosystem Soil Temperature (NEST) model in the central part of the Hudson Bay Lowland in northern Ontario, Canada. The study area is near the southern margin of permafrost region where permafrost exists only in isolated patches. In this study, we ran the NEST model from 1932 to 2012 using a climate data set compiled from station observations and grid data sources. The model outputs were then compared to field observations acquired during 2009–2012 at seven peat monitoring stations and two flux towers, which represent three major types of peatland in the study area (bog, fen, and palsa). The simulated soil temperatures at various depths show good agreement with the observations, and the simulated latent and sensible heat fluxes and net radiation are similar to the observations at the two flux towers. The model accurately shows the existence of permafrost only at palsa sites. Based on the general range of climate and ground conditions in this area, sensitivity tests indicate that the modelled permafrost conditions are sensitive to leaf area index, air temperature, precipitation, and soil texture. Therefore, the NEST model is capable of simulating ground temperature and permafrost conditions in where permafrost occurs only sporadically. A companion paper (part 2) uses the model with Landsat and Radarsat imagery to map the distribution and dynamics of permafrost in this area.

Permafrost thawing with a changing climate has significant ecological and socio-economic impacts. In a previous paper (Part 1 - Ou et al. 2015), we showed that the Norther Ecosystem Soil Temperature model can be used to model soil temperatures and permafrost in a warm and discontinuous permafrost area that is located in the Hudson Bay Lowlands in northern Ontario, Canada. This paper applies the model over the whole study area to map the distribution of permafrost conditions and their changes from the 1960s to the 2000s at high spatial resolution. Some of the model inputs were estimated based on land-cover and surficial material maps derived from Landsat-5 TM and Radarsat-2 SAR images. The 49 field-observed permafrost landform sites found in the study area were correctly identified on the classified image. This spatial modelling study shows that permafrost currently underlies about 9.4% of the land in this area, and varies among land-cover types. With the increases in mean annual air temperature (1.9°C) and precipitation (2.4%) from the 1960s to the 2000s, the model results show a deepening of active layer by 20.5%. However, the permafrost has persisted in most of the area due to the protection of thick peat. The modelled permafrost extent reduced only from 9.8% to 9.4%. 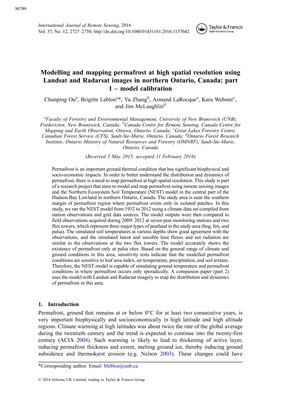