The establishment and spread of Sirex noctilio F. (Hymenoptera: Siricidae), in northeastern North America necessitates reliable monitoring methods for this alien woodwasp pest of Pinus. The native congener, S. nigricornis F., is common across the eastern United States and has been studied as a proxy for S. noctilio. Predicting emergence of S. noctilio is important to guide monitoring efforts. Degree day models have been developed to predict flight phenology of S. noctilio and S. nigricornis across eastern North America. These model parameters were tested against three years of S. nigricornis collections from two locations in Arkansas. Neither of the proposed models accurately predicted emergence. Emergence of females for both S. noctilio and S. nigricornis was significantly negatively correlated with minimum and maximum temperature, indicating that emergence increases when minimum and maximum temperatures decrease. These results suggest that as S. noctilio spreads south, where higher mean temperatures are present, it will emerge later in the season as temperatures decline compared to the current northeastern population. We propose that monitoring for the spread of S. noctilio in the southeastern United States should begin slightly before daily temperatures are expected to decline (i.e. mid-September). 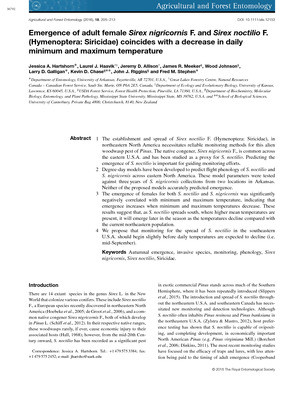