When related species coexist, selection pressure should favor evolution of species recognition mechanisms to prevent interspecific pairing and wasteful reproductive encounters. We investigated the potential role of pheromone and acoustic signals in species recognition between two species of tree-killing bark beetles, the southern pine beetle, Dendroctonus frontalis Zimmermann, and the western pine beetle, Dendroctonus brevicomis LeConte, in a narrow zone of sympatry, using reciprocal pairing experiments. Given the choice of adjacent con- or heterospecific female gallery entrance in a log, at least 85% of walking males chose the entrance of the conspecific, and half the males that initially entered heterospecific galleries re-emerged and entered the conspecific gallery within 15 min. Waveform analysis of female acoustic “chirps” indicated interspecific differences in chirp timing. Males may use information from female acoustic signals to decide whether to enter or remain in the gallery. Individuals in forced heterospecific pairings (produced by confinement of a heterospecific male within the female entrance) did not differ in pheromone production from individuals of conspecific pairs. However, due to the absence of the right species of male, galleries with heterospecific pairs released an abnormal pheromone blend that lacked at least one key component of the aggregation pheromone of either species. The complete aggregation pheromone (i.e., the pheromone blend from entrances with pairs) does not appear to deter interspecific encounters or confer premating reproductive isolation per se; however, it may confer selective pressure for the maintenance of other reproductive isolation mechanisms.

This study was conducted in order to better understand how two species of Western pine beetles were able to find, in areas where both species are present, the galleries dug by their own species in order to reproduce. Beetles use these galleries to reproduce and carry out mass attacks on trees. 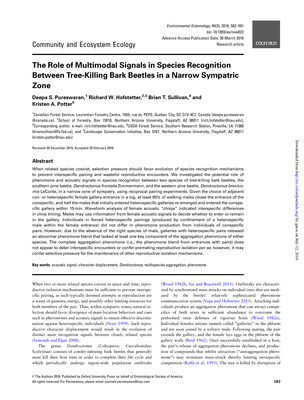