In order to reduce the impact of salvage harvesting on biodiversity in burned stands, the researchers identified forests with a high conservation value for insect species that are at greater risk. In the eastern portion of the boreal forest, such forests comprise large-diameter jack pine or black spruce trees that are slightly to moderately burned.

With the intent of maintaining biodiversity, the researchers recommend maintaining a strip of intact trees on the periphery of burned forests because this transition zone provides a suitable habitat for insect species that are associated with burned forests. 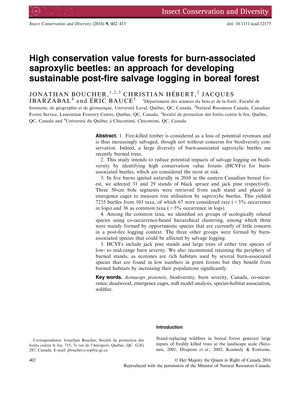