Beetles are one of the most species-diverse groups of animals on the planet. They live in many different microhabitats and have a variety of “roles” in our ecosystems. Many feed on plants, some feed on fungi, and many are predators of other insects or other animals. Knowing which species are present in Canada and how they are distributed is useful because we can then monitor changes in species diversity and distribution that might happen in the future as a result of habitat disturbance, e.g., a changing climate. This paper documents the collection of 134 beetle (Coleoptera) species in New Brunswick that had never been previously recorded in the province, including four beetles species recorded in Canada for the very first time. The beetles belong to 41 different families. Close to 80% of these beetles were collected in traps as part of another study on development of improved methods of surveying for bark- and wood boring beetles that might have been accidentally introduced to Canada from Europe or Asia. In most trapping studies, the “non-target” species collected in traps are ignored. However, we took advantage of the opportunity provided by our trap samples to identify non-target species in many beetle families, and thereby increased our knowledge of beetle species diversity and distribution in Canada. This information is critical if we want to measure changes that may occur in the future due to ecosystem disturbances. 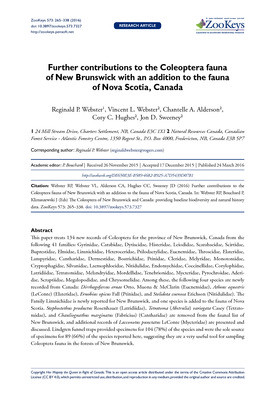