The production of pyrogenic carbon (PyC; a continuum from partially charred biomass through charcoal to soot) is a widely acknowledged carbon (C) sink; however, its quantitative importance in the global C balance remains contentious and, therefore, PyC is rarely considered in global C cycle and climate studies. Here we examine the robustness of existing evidence, and identify the main research gaps in the production, fluxes and fate of PyC from vegetation fires. Much of the previous work has focused only on some components of the PyC generated in vegetation fires, leading to potentially underestimates of PyC production. We suggest that global figures could be in the range of 114-379 Tg C yr-1, with atmospheric emissions of soot-black C being a smaller component (0.5-1.7%) than previously reported. Research to date on the fate of PyC in the environment has mainly focused on its degradation pathways, and its accumulation and resilience either in-situ or in ultimate sinks. Existing research often overlooks off-site transport and transformation, as well as PyC storage in intermediate pools, which could explain the fate of a substantial fraction of the PyC mobilized annually. We propose new research directions, which are aimed at overcoming the gaps identified and towards achieving a full understanding of the PyC cycle and its significance in the global C balance.

Vegetation fires consume large amounts of living and dead biomass but also leave behind charred blackened residues. This pyrogenic carbon (PyC) includes a range of chemical structures, and generally lasts longer in the environment than other dead organic matter. It has hardly been included in C budget models because there is not enough information on its production, chemistry and resistance to decomposition, and fate in the environment. Our multi-disciplinary team aimed to summarize existing knowledge on PyC and to identify research gaps. Much previous work measured only part of the PyC from vegetation fires; we suggest that global figures could be much higher (114-379 Tg C/year), but atmospheric emissions of soot-PyC smaller (0.5-1.7%) than previously reported. Similarly, much research examined degradation pathways and PyC accumulation or loss on-site, but we highlight the importance of off-site transport (e.g., erosion, landslides, river flow), as well as storage in intermediate pools. Forest fires are predicted to increase and PyC may already be a larger and more active component of the C cycle than previously realized: targeted research efforts are needed to fill information gaps and allow PyC to be included in C budget modeling. 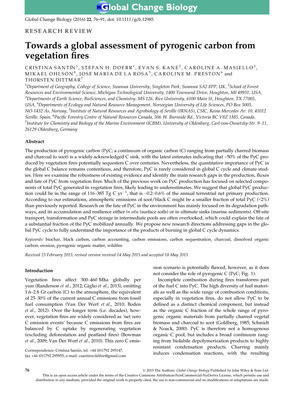