Studying the larvae of wood boring insects is difficult because this stage of the life cycle is spent hidden from the eyes of researchers. Previous studies have used sections of bark and phloem sandwiched between pieces of glass or plastic to permit observation within the host substrate. The development of artificial diets for bark and wood boring insects has allowed the development of new techniques to study these insects under more consistent conditions. We modified an artificial diet in order to replicate the phloem sandwich technique by using a tortilla press to prepare sheets of artificial diet and then tested this technique by rearing larvae of the emerald ash borer, Agrilus planipennis Fairmaire (Coleoptera: Buprestidae). We reared neonates and older larvae extracted from infested trees on the diet sandwiches and found rates of establishment and survivorship were higher for older larvae extracted from trees than for neonates. Our technique improves upon traditional phloem sandwiches by allowing all larvae to be reared under the same conditions and permitting the observation of larval behaviour even when the larva is submerged in the diet.

In this paper we present a new way of rearing wood boring insects in artificial diet. An earlier study had developed a diet for emerald ash borer (EAB). We modified the preparation of this diet to improve its quality and adapted the diet to prepare sheets that we subsequently mounted between glass slides. This technique replicates an older method of rearing bark and wood boring insects that uses pieces of bark and phloem extracted from trees (so-called “phloem sandwiches”). Our ‘diet sandwich’ technique is a novel way of rearing these types of insects. This paper describes the production of the diet and the diet sandwiches and then tests the performance of EAB. Using this method we were able to successfully rear some insects to pupation. In doing so we found that larger, older EAB larvae extracted from trees adapted to being placed on the diet better than smaller, younger EAB we hatched from eggs. We argue that our method could be useful in the testing of new insecticides or in understanding the reaction of EAB larvae to phytochemicals produced by ash when they are attacked by the insect. This is a new technique. 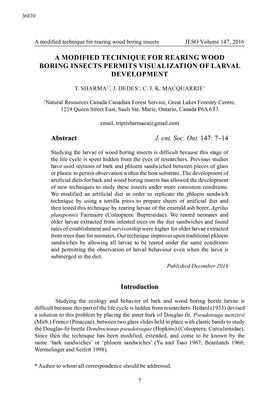