Uncertainty about future outcomes of invasions is a major hurdle in the planning of invasive species management programs. We present a scenario optimization model that incorporates uncertainty about the spread of an invasive plant pest and optimizes the deployment of survey and eradication measures to minimize the number of infested or susceptible host plants remaining on the landscape. The model accounts for program budget constraints and decision-makers’ "slow-the-spread" aspirations. We demonstrate the approach by allocating verification surveys and treatment efforts (i.e., host tree removal) outside the quarantine area established following the discovery of a residual population of the Asian longhorned beetle (ALB, Anoplophora glabripennis) in 2013 in the Greater Toronto Area (GTA) of Ontario, Canada. We use historical data gathered in Toronto on ALB spread to generate a set of stochastic invasion scenarios that characterizes the uncertainty of the pest’s extent and impact in the GTA. We then use these scenarios in our optimization model to find cost-effective deployments of surveys and tree removals aimed at managing the spread of the pest outside that quarantine area. Our model produced a two-tiered pattern of survey locations. Most surveys were in high-risk sites in close proximity to the quarantine zone, and a smaller number were in distant sites that could serve as potential foci for spreading the insect elsewhere. It was optimal to spend approximately one-fifth of the project budget on surveys and the rest on tree removal. Because of budget constraints, optimal solutions do not always select survey sites with the greatest propagule pressure or highest density of host trees, but in some cases focus on sites with moderate likelihoods of ALB arrival and low host densities. Our approach is generalizable and helps support economic decisions regarding surveillance and control of invasive species when knowledge about a species’ current distribution and potential spread is uncertain. 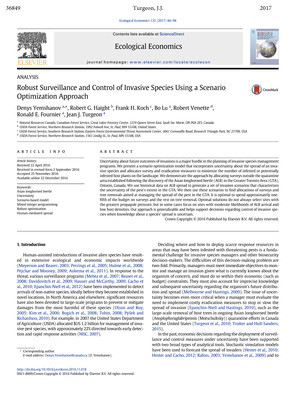