Assessing risks of uncertain but potentially damaging events, such as disease epidemics and pest invasions, is a key analytical step that guides subsequent decisions about how to respond to these events. We present a continuous risk measure that is influenced by both the expected magnitude of risk and tis uncertainty. We first represent a set of probabilistic risk values (such as a set of invasion epidemic risk estimates at different geographical locations) by their cumulative distribution functions (CDFs) and then, using the first-order stochastic dominance rule, find ordered non-dominant subsets of these CDFs, which we use to identify different classes of risk, from high to low. Because each non-dominant subset is estimated with respect to all elements of the set, the uncertainty in the underlying data is factored into the delineation of the risk classes; essentially, fewer non-dominant subsets can be defined in portions of the full set where information is sparse. We depict each non-dominant sampling intervals. For each subset, we then define a hypervolume that is bounded by the outermost convex frontier of that point cloud. This results in a collection of hypervolumes for every non-dominant subset, which together act as a measure of risk. This risk measure is continuous and therefore may be more practically useful than ordinal risk rank measures. We demonstrate the approach by assessing risks of human-mediated spread of Asian longhorned beetle (ALB, Anoplophora glabripennis) in Greater Toronto (Ontario, Canada). We calculated the hypervolume metric using stochastic estimates of the human-mediated spread of ALB epidemic through the urban environment and compared this metric with traditional risk measures based on the probability of the species' spread. Overall, the approach offers a rigorous depiction of risk under uncertainty because it factors in the unceratinty that is present in the data via delineation of the non-dominant subsets, and characterizes the magnitude of risk with a continuous measure that can be used to compare assessments made with different datasets and assumptions. 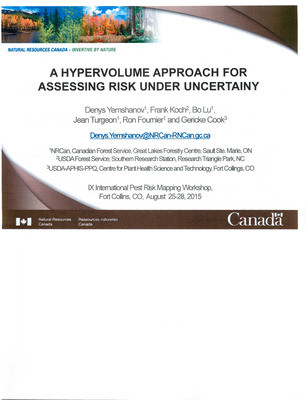