Forming the majority of plant diversity in boreal forests, understory communities are important drivers of nutrient cycling and overstory succession. In western Canadian boreal forests, fire is the primary mechanism of natural disturbance, with oil sands mining a substantial anthropogenic disturbance in north-eastern Alberta. An operational reclamation trial, at an oil sands mine, was established the same year as a nearby forest fire, allowing for direct comparison of plant community development between reclaimed and naturally regenerated fire-origin and mature stands. This work reflects a case study with large, but unreplicated, areas of both fertilized and unfertilized reclamation treatments on forest floor-mineral mix (FFMM) and peat-mineral mix (PMM) capping materials. After three years, reclamation sites are compositionally distinct from post-fire and mature natural stands, with more non-native species in reclamation treatments than in natural stands. Communities developing on FFMM are more similar to post-fire successional communities than those on PMM, with high species richness and diversity on FFMM comparable with post-fire stands. Cover soil had a stronger impact on plant community development than fertilization, with fertilization effects dependent on cover soil. A standard dose of fertilizer lowered richness and diversity on FFMM and is not recommended for use with that soil.

In western Canadian boreal forests, fire causes most natural disturbance, and oil-sands mining presents a substantial human-caused disturbance in north-eastern Alberta. A forest fire occurred on some land next to an oil sands mine in northern Alberta. This provided a perfect opportunity to compare how land recovers from these two types of disturbances (oil sands mining and fire). We studied what plants grew on the two disturbed sites and compared reclaimed and naturally regenerated fire-origin and natural mature stands. On the reclaimed oil sands sites, two soil mixtures were used: forest floor mineral mix (FFMM) and peat-mineral mix (PMM); some areas of these soils were fertilized while others were left unfertilized. After three years, the groups of plants that grew on the reclaimed sites were distinct from post-fire and mature natural stands, with more non-native species growing in reclamation treatments than in natural stands. The groups of plants growing on FFMM sites were more similar to the post-fire groups of plants than those on PMM sites, and the high number of plant species growing on FFMM sites was comparable with post-fire stands. Cover soil had a stronger effect on a site’s ability to grow plants than fertilization, with fertilization effects dependent on the type of soil. A standard dose of fertilizer resulted in fewer species on FFMM sites and is not recommended for future use with that soil. 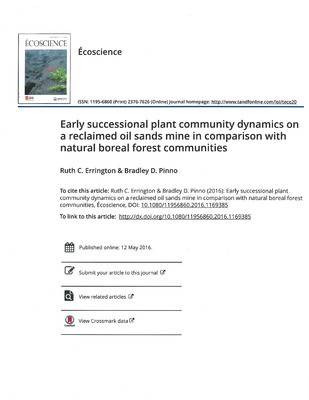