Two new species, Atheta pseudovestita Klimaszewski & Langor, sp. n., Silusa prettyae Klimaszewski & Langor, sp. n., are described, and 16 new provincial records, including one new country record, of aleocharine beetles are presented for the province of Newfoundland and Labrador. Diagnostics, images of habitus and genital structures, distribution, bionomics information and new locality data are provided for the newly recorded species. A new checklist with 189 species of aleocharines recorded from the province is presented.

In this article, the researchers describe two new insect species, Atheta pseudovestita and Silusa prettyae, and suggest a new list of aleocharine beetles for Newfoundland and Labrador. This article also includes an identification key for these beetles.

Taxonomy is a science that classifies living organisms. Insects are grouped according to different orders, which are then divided into families, genera and species. Taxonomy is namely used in biodiversity studies or in assessments of the impacts of human activities on forest ecosystems. 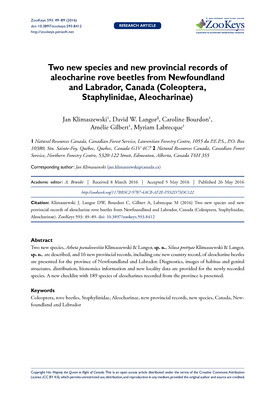