The goal of this study was to investigate the fungal community composition in the gut of Staphylinidae from boreal forest in order to better understand the diversity and the complexity of fungus-insect relationships. DNA gut content analyses of nine abundant rove beetle species (Coleoptera, Staphylinidae) living in the boreal balsam fir forest ecosystem (Montmorency Forest, Quebec, Canada) were performed to identify the fungal taxa present either as endosymbiotic taxa or as a source of nutrition. A total of 42 fungal operational taxonomic units (OTUs) were recorded from the analysis of 441 fungal ITS rDNA sequences recovered from gut extracts. The OTU richness per species ranged between four in Tachinus quebecensis and 16 in Atheta ventricosa. The fungal mycobiota in posterior gut extracts was dominated by Saccharomycetales (12 OTUs), followed by Sordariomycetes (nine OTUs). No significant difference was observed between the OTU richness recorded within each of the three subfamilies of rove beetles investigated. The core mycobiome of the posterior gut extracts was dominated by three OTUs related to yeasts, with ITS sequences having pairwise similarities equal to or greater than 99% with Candida mesenterica, Debaryomyces spp. and Ophiostoma pluriannulatum. These results provide some evidence of the consumer-resource relationships of these beetles. Predominance of yeast and fungal spores in the posterior gut of rove beetles suggests that they may play an important role in their dietary requirements and as endosymbionts.

In this study, the researchers identified 42 species of fungus by examining the digestive tract contents of nine ground-dwelling beetle species of the boreal forest. They successfully identified these fungus species by comparing their DNA with that of known fungal species.

These results indicate the possible presence of a mutually-beneficial cooperative relationship between the beetles and the fungi. 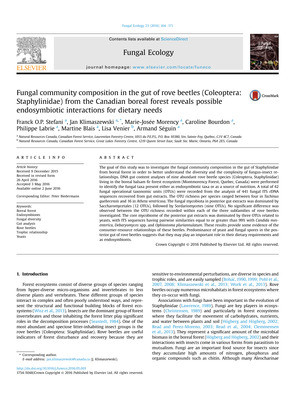