In a recent study of the hemlock looper (HL), Lambdina fiscellaria (Guenee) (Lepidoptera: Geometridae), long exposure of early-diapausing eggs to high temperatures considerably reduced their ability to hatch. This finding raised the possibility that adults could also be negatively affected by increasing temperatures if they reproduced too early in the season in response to global warming. To investigate this hypothesis, newly formed HL pupae from three populations of eastern Canada – Quebec (QC), Newfoundland (NL), and Labrador (LB) – were submitted to four constant temperatures (10, 15, 20, or 25 °C) during pupal and adult development. The effect of population origin on HL reproduction was generally negligible. Mating probability was high at 15 and 20 °C (0.86 and 0.83, respectively), quite low at 10 °C (0.53), and even lower at 25 °C (0.38). Mating started earlier in the night and lasted longer as temperature decreased. Both productivity and absolute fecundity increased when temperature increased from 10 to 15 °C and then decreased slowly as temperature increased further. Over populations and temperatures, relative fecundity averaged 0.95, indicating that females had enough time to lay most of their eggs before they died. High temperatures had a deleterious effect on egg fertility: between 10 and 20 °C, relative fertility was about 0.90, but it dropped to 0.51 at 25 °C. The average proportion of fertile eggs declined from 0.88 in the first quarter of the egg-laying period to 0.57 in the last quarter, suggesting lower sperm count or viability, or deterioration of the oocytes as the egg-laying period progresses. Based on these findings, we argue that the production of an additional fifth instar among HL populations of southern origin can be viewed as an adaptive mechanism allowing adults to postpone reproduction or the egg-laying period in order tomitigate the detrimental effect of high temperatures on their probability of mating successfully or that of laying fertile eggs.

This study showed that extended exposure of hemlock looper pupae and adults to temperatures higher than normal reduces their likelihood of breeding as well as the number eggs laid and their fertility.

Recent research initiatives have shown that hemlock looper eggs have trouble hatching when they are exposed to high temperatures for too long. In this study, researchers set out to determine if adult hemlock loopers were also negatively affected if they bred too early in the season due to rising temperatures resulting from global warming. In order to avoid the negative impact of rising temperatures, the hemlock looper would benefit from prolonging its larval development by introducing one or two additional larval stages. 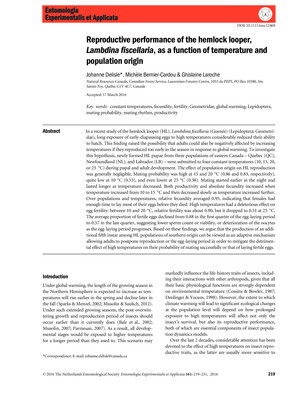