We compared pheromone production and response for populations of western pine beetle, Dendroctonus brevicomis LeConte, from sites in northern Arizona and northern California. Volatiles were collected from individuals of both sexes that had mined as a pair in a Pinus ponderosa log for 1 d, and they were subsequently analyzed by gas chromatography coupled to mass-spectrometry. Principal component analysis of quantities of Dendroctonus pheromone components indicated strong site-associated clustering of blend composition for females but not males. Much of the clustering in females evidently was due to differences in the production of endo- and exo-brevicomin, which occurred in average ratios of 0.1:1 and 19:1 for populations in the California and Arizona sites, respectively. In the California site, exo- was better than endo-brevicomin in enhancing trap catches of both sexes to lures containing the host-tree odor α-pinene and the male-produced aggregation pheromone component frontalin. In an identical test in the Arizona site, endo- was a better adjuvant than exo-brevicomin for male attraction, whereas females did not show a significant preference. At neither location were the isomers antagonistic to one another in activity. Thus, one aggregation pheromone has apparently diverged between these populations, concurrent with published evidence that D. brevicomis on either side of the Great Basin are genetically distinct and are possibly different species. Furthermore, production of and response to the isomers of brevicomin by flying Dendroctonus frontalis Zimmermann in the Arizona site were similar to those of sympatric D. brevicomis. This interspecific signal overlap is likely sustainable since joint species mass-attacks may assist both species in overcoming host defenses, thereby increasing host availability.

The purpose of this study was to compare pheromone production between two species of western pine beetles in Arizona and California. Pheromones are chemicals produced by insects in order to find mating partners.

Researchers discovered that both species of pine beetles studied can detect the pheromones emitted by the other species, despite the fact that the chemical composition of these pheromones varies between the two species. As a result, they attack a greater number of host trees. 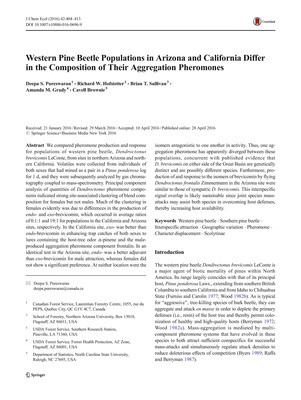