We present a case study in which we assessed the effects of a severe soil perturbation on the plant community and soil variables in young hybrid poplar (Populus sp.) plantations of southern Québec (Canada). Our overall goal was to test if soil perturbation and planting fast-growing species could promote the reestablishment of a relatively diverse plant community. A chronosequence that included three plantations (4, 8, and 12-year old) established after soil scarification, paired with three natural stands representative of the local temperate mixedwood forest comprising both pioneer and late-successional tree species, was implemented. Vegetation surveys and soil collection were performed in 2012 and species traits were provided by the Traits Of Plants In Canada and TRY databases. Principal response curve analyses showed species and functional trait divergence between treated and natural stands at ages 4 and 8, but that those divergences were less at age 12. Species and trait convergences were slower in the scarification furrows than in the scarification berms (mounds between furrows). However, severe site preparation did not appear to affect soil variables on the study sites. Our results suggest that even following severe site preparation, gradual recovery of species and trait composition similar to that of natural stands appears possible in the long term, mainly through fast canopy development by hybrid poplar. However, organic material export and soil erosion risks associated with this type of site preparation need to be evaluated.

The goal of this study was to determine whether such soil preparation affects its fertility. Plant community composition was used by the researchers as an indicator of changing soil properties. The study was carried out in hybrid poplar plantations in southern Quebec.

Differences in the plant community were noted between 4- and 8-year-old plantations and natural stands. Differences decrease when plantations reach the age of 12 years.

The study’s results suggest that even after severe soil disturbance during site preparation for plantation, the plant community gradually recovers to reach conditions that are similar to those found in natural stands. This can be explained in part by the fast development of hybrid poplars that quickly recreate the forest canopy. 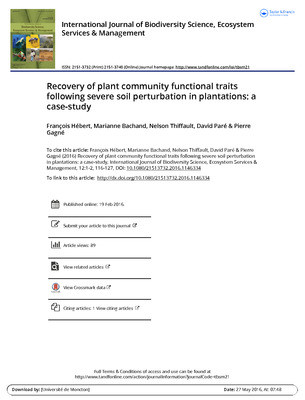