It is important to monitor and understand disturbances in forests at a national and regional level. Key among these disturbances are stand-replacing changes, such as harvest, deforestation, and burns. Possible sources of disturbance information include remote sensing, whether through automated techniques or manual interpretation, and forest inventories with inventory updates. This report uses a pilot study to explore the synergy and combination of such data sources to map human-induced changes such as harvest and deforestation. The pilot region was the Prince George area of central British Columbia. This area has characteristics representing several major types of landscapes and human activity found across Canada, and contains some of the more difficult settings for deforestation mapping. Decadal change (1990–1999) was used to explore methods of capturing forest change. Methods examined in detail were: automated two-date change classification using Landsat imagery, manual interpretation of the same imagery supported by ancillary data and quality control steps, and use of updated provincial forest inventory maps. A particular focus was on the effectiveness of data sources and methods for deforestation mapping (e.g., ancillary data, site familiarization and local records, the interpretation environment, the interpretation process, field verification, second-cycle mapping review, automated classification, and forest inventory data). Automated change classification with post-processing was very effective for clearcut mapping in a simple industrial forest setting. However, it was not sufficient to utilize directly or as a main source of polygons for deforestation mapping, especially in more complex urban or mixed rural residential, agriculture, and forest areas. Forest inventory was lacking in terms of being up to date and, for deforestation mapping, did not provide enough spatial, cover type, or land use information. Nevertheless, the forest inventory still provided useful harvest polygons and information for deforestation assessment. The effort to undertake automated change classification was not warranted for deforestation mapping alone. In environments with mixed forest management and agriculture, and (or) rural development, automated techniques will require some human interpretation to differentiate harvests from deforestation as there can be considerable confusion between them. Results informed the development of Canada’s National Deforestation Monitoring System and provide insight into how to monitor forest harvest and other changes at regional and national levels.

The publication describes a pilot study that helped provide foundation information and insight to develop the methods used in Canada’s National Deforestation Monitoring System. All forest harvest and deforestation from 1990 to 1999 was mapped using Landsat satellite imagery for a 14,000 km2 area centred at Prince George, BC. The deforestation in the region is one of the more difficult types to map, whereas forest harvest was mostly simple rectilinear clearcuts. The pros and cons of automated classification, provincial inventory data and manual interpretation were determined and detailed accuracy assessments done. It was determined automated techniques were good for clearcuts, but insufficient for deforestation mapping. For deforestation mapping, the importance of ancillary data, high resolution imagery, quality checks, and review of deforestation events during subsequent mapping periods was demonstrated. The forest harvest and deforestation product has been and is being used to test spatially explicit carbon accounting techniques and contributed numbers to Canada’s deforestation estimates. The report is a vehicle to document an example of the detailed studies conducted to develop and prove Canada’s deforestation mapping procedures. 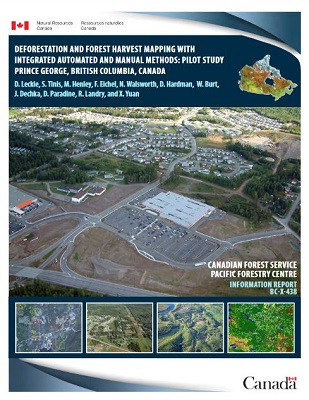