Background According to the post-2012 rules under the Kyoto protocol, developed countries that are signatories to the protocol have to estimate and report the greenhouse gas (GHG) emissions and removals from forest management (FM), with the option to exclude the emissions associated to natural disturbances, following the Intergovernmental Panel on Climate Change (IPCC) guidelines. To increase confidence in GHG estimates, the IPCC recommends performing verification activities, i.e. comparing country data with independent estimates. However, countries currently conduct relatively few verification efforts. The aim of this study is to implement a consistent methodological approach using the Carbon Budget Model (CBM) to estimate the net CO2 emissions from FM in 26 European Union (EU) countries for the period 2000–2012, including the impacts of natural disturbances. We validated our results against a totally independent case study and then we compared the CBM results with the data reported by countries in their 2014 Greenhouse Gas Inventories (GHGIs) submitted to the United Nations Framework Convention on Climate Change (UNFCCC).

Results The match between the CBM results and the GHGIs was good in nine countries (i.e. the average of our results is within ±25 % compared to the GHGI and the correlation between CBM and GHGI is significant at P < 0.05) and partially good in ten countries. When the comparison was not satisfactory, in most cases we were able to identify possible reasons for these discrepancies, including: (1) a different representation of the interannual variability, e.g. where the GHGIs used the stock-change approach; (2) different assumptions for non-biomass pools, and for CO2 emissions from fires and harvest residues. In few cases, further analysis will be needed to identify any possible inappropriate data used by the CBM or problems in the GHGI. Finally, the frequent updates to data and methods used by countries to prepare GHGI makes the implementation of a consistent modeling methodology challenging.

Conclusions This study indicates opportunities to use the CBM as tool to assist countries in estimating forest carbon dynamics, including the impact of natural disturbances, and to verify the country GHGIs at the EU level, consistent with the IPCC guidelines. A systematic comparison of the CBM with the GHGIs will certainly require additional efforts—including close cooperation between modelers and country experts. This approach should be seen as a necessary step in the process of continuous improvement of GHGIs, because it may help in identifying possible errors and ultimately in building confidence in the estimates reported by the countries.

The aim of this study is to implement a consistent methodological approach to estimate the net CO2 emissions from forest management in 26 European Union (EU) countries for the period 2000-2012, including the impacts of natural disturbances. The study applied the Carbon Budget Model of the Canadian Forest Sector (CBM-CFS3) to 26 EU countries and compared the CBM results with the estimates reported by countries in their 2014 Greenhouse Gas Inventories (GHGIs) submitted to the United Nations Framework Convention on Climate Change (UNFCCC). The study found a range of outcomes including close agreements between CBM results and nationally-reported estimates, as well as cases where only trends or stocks were in agreement, and a few cases were neither agreed. In many cases these discrepancies can be explained, and in a few cases this has already informed and improved national GHGI of EU countries. This application of consistent methods contributes to the continuous improvement of GHGIs, because it helps in identifying possible errors, increases scientific understanding and ultimately builds confidence in the estimates of emissions and removals reported by the countries by increasing consistency, transparency and completeness of the estimates. 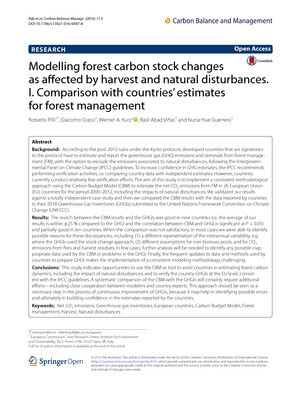