Site index (SI), defined as stand dominant height at a given reference age, is a commonly used measure of forest productivity. SI is typically estimated by applying species-specific models to a sample of dominant trees in the stand (age‐height curves). Once assessed, SI allows managers to project stand height at given age. Airborne laser scanning (ALS) is a technology that acquires three-dimensional point clouds and enables accurate estimates of various single tree and stand-level attributes, including height. In this research, we investigate differences between stand heights derived from SI curves and stand heights measured with ALS data in a coastal forest dominated by western hemlock (Tsuga heterophyla) in western Canada. Our results show significant differences between compared stand heights: The mean difference between the ALS-derived stand height and the SI-derived was 3.5 m, with the largest differences observed for stands dominated by western redcedar (Thuja plicata). The main drivers influencing height differences were stand complexity and canopy cover, whereas the number of species in the stand or site characteristics, including elevation, slope, and aspect had less of an impact on SI estimation. The impact of the difference in SI estimation was demonstrated by estimating overall stand volume at a projected stand age of 80 years. The average relative difference between volumes calculated with original and ALS-corrected SI was 51.5%. Implications of this research affirm that SI methods currently used in this area are best suited to even-aged, pure stands. ALS data can be used to augment SI estimation, especially in complex, heterogeneous forest stands, as it is able to accurately characterize stand heights. When incorporated into forest inventories ALS-derived stand heights can have a marked impact on height and volume information of forest stands.

Site index (SI), defined as stand dominant height at a given reference age, is a commonly used measure of forest productivity. SI is typically estimated by applying species-specific models to a sample of dominant trees in the stand (age-height curves). Once assessed, SI allows managers to project stand height at a given age. We first compare ALS-derived stand heights with stand heights predicted using forest inventory SI and stand age. Second, we examine if there are certain stand characteristics that consistently result in either an over- or underestimation of stand height in the reference data (relative to the ALS-derived stand height). Third, we generate a revised site index value using the ALS data in concert with the forest inventory information, and assess the impact of the revised site indices on future stand merchantable volume projections. Finally, we conclude with some recommendations on the potential role of ALS data in assessing site productivity and discuss how ALS data can be used to improve existing site index estimates for applications such as timber supply analysis and carbon budget modelling. 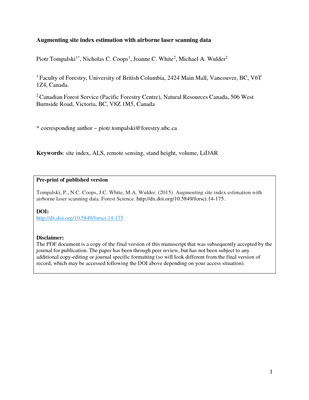