Forests with old growth white pines have been severely reduced compared to historical levels. We examined resident and cavity-nesting bird species abundances in winter and the breeding season because some of these species may prefer old forest habitats for breeding. We counted birds over 10 years in four mixedwood types: old pine, mature pine, mature non-pine, and selection-harvested stands. We expected that old pine stands would be selected by some species because of abundant snags and large trees for foraging. We assessed habitat use among years, and changes following harvesting. Counts of nomadic species varied across years but counts for others did not. Species used old and mature pine mixedwoods equally and more than non-pine or harvested stands in winter and for breeding, but old stands were not preferred. Important variables included percent pine and large tree density. Selection harvesting benefited yellow-bellied sapsuckers but reduced counts of black-capped chickadees and brown creepers. Black-capped chickadees changed habitats between seasons and in some years. Black-backed woodpeckers were most common in pine stands but abundant in harvested stands for 2 years following cutting. Regardless of stand age, large (>40 cm) pines provide important habitat for residents and cavity-nesters. 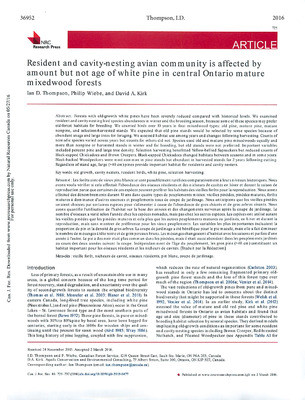