Fire is considered the major disturbance in boreal forests. Nonetheless, in several areas logging has become the primary driver of forest dynamics. In many areas of the boreal forest, stands may undergo paludification (i.e. the accumulation of thick, poorly decomposed organic layers over the mineral soil) in the prolonged absence of fire, which reduces forest productivity. Whereas high-severity fires (HSF) may restore forest productivity by burning the soil organic layer (SOL), low-severity fires (LSF) mainly burn the soil surface and do not significantly reduce SOL thickness. In the Clay Belt region of eastern Canada, an area prone to paludification, forest stands have historically been harvested by clearcutting (CC), but concerns about the protection of soils and tree regeneration lead to the replacement of CC by careful logging (CL). Whereas CC disturbs the SOL and is thought to favor tree growth, CL has little impact on the SOL. Furthermore, it has been suggested that prescribed burning after clearcut (CCPB) could also be used to control paludification. Using a retrospective approach, this study sought to understand how CC, CL, and CCPB compare to LSF and HSF with respect to soil properties, SOL thickness, vegetation ground cover, tree nutrition, and stand height in paludified black spruce stands of the Clay Belt region. HSF led to significantly taller trees than CL and LSF, but did not differ from CC and CCPB. Foliar N was significantly higher in HSF and CCPB sites relative to CL and LSF, with an intermediate value in CC sites. Ground cover of Rhododendron groenlandicum was significantly lower in HSF and CC sites relative to LSF, with intermediate values in CL and CCPB sites. Sphagnum spp. ground cover was significantly lower in HSF and CCPB sites relative to CL, with intermediate values in CC and LSF sites. High-severity fire sites had a significantly thinner SOL than the four other disturbances. Finally, regression tree analysis showed that SOL thickness represented the best predictor of tree height, whereas segmented regression showed that tree height was negatively correlated to SOL thickness and revealed a cut-off point circa 23 cm, which suggests that tree growth is impeded beyond this threshold. These results support the idea that management strategies intending to regenerate paludified forests should primarily aim at reducing organic layer thickness, either through mechanical disturbance or combustion.

The results of this review indicate that management strategies targeting the regeneration of forests that are likely to become peatlands should focus on reducing the layer of organic matter on the ground through mechanical disturbance of the soil or prescribed burning.

In this article, the researchers set out to understand the effects of forest fires and certain silvicultural treatments (clearcutting, cutting with protection of regeneration and soils, prescribed burning) on the regeneration of black spruce stands that are likely to become peatlands. 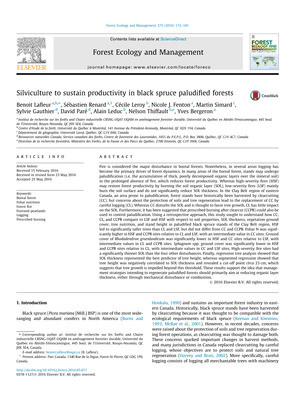