Forest fires are an important disturbance factor of boreal forests, annually burning about 0.5% of the forested area in Canada. Wildfire regimes are influenced by climate and a number of studies project an increase in wildfire activity with climate change. Another factor influencing wildfires is human intervention (fire suppression), and one factor that has rarely been assessed is fuel fragmentation. Studies evaluating the effect of forest fire suppression concluded that in areas with strong suppression effort the burned area as well as the fire size decreased.

Here we evaluate wildfire distributions over the last three decades for two areas that differ mainly in their level of forest management and fire suppression: the Boreal Shield (unmanaged) and the Boreal Plain regions (intensively managed) in the Canadian Province of Saskatchewan.

We calculate a fuel fragmentation index and relate fire sizes and burned areas to fire weather. We use the concept of the characteristic fire size (CFS); hence we analyze how much burned area is contributed to the total burned area per fire size class.

Both areas show a uni-modal distribution of the CFS, indicating that the majority of burned area was contributed by medium sized fires (Boreal Shield 6.39 · 104 ha, the Boreal Plain 8.79 · 104 ha). Burned area as well as fuel fragmentation is lower in the managed forest compared to the unmanaged area.

The fuel fragmentation index constantly increased since the 1980s in both regions. Despite the large efforts of fire suppression in the Boreal Plains, the CFS is slightly larger in this managed region. Neither the burned area nor the fire size could be linked statistically to the weather conditions, at the time of the fire (using the Canadian Fire Weather Index).

We argue that the high fragmentation over the last decades have decreased the burned area. The slightly higher characteristic fire size in the managed area might be explained by the considerably lower fragmentation, counteracting fire suppression efforts. Fuel fragmentation is likely to decrease over the next decades due re-growth. Though a strong link between fire weather and burned area at the fine scale of this study could not be detected we expect that a decrease in fragmentation in combination with an increase in fire prone weather conditions (as expected for the future) might increase the risk of large fires in both areas. We suggest that future fire risk analysis should include an assessment of the effect of fuel fragmentation.

The Canadian Forest Fire Weather Index (FWI) System is the mostly widely used fire danger rating system in the world. We developed a global fire weather database of daily FWI System calculations for the period 1980–2012, gridded to a resolution of 0.5 latitude by 2/3 longitude. We compared FWI System Drought Code calculations from our data sets to calculations from individual weather station data for a representative set of 48 stations throughout North, Central and South America, Europe, Russia, Southeast Asia and Australia. The database will be useful for analyzing historical relationships between fire weather and fire activity at continental and global scales, in identifying large-scale atmosphere–ocean controls on fire weather, and in calibration of FWI-based fire prediction models. 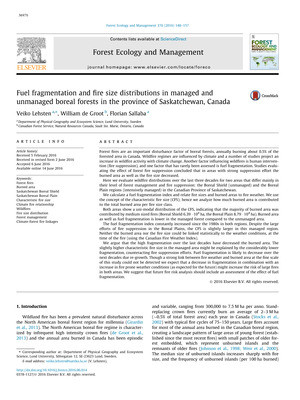