Sirex noctilio F. (Hymenoptera: Siricidae) is a woodwasp of pine trees that has recently invaded and established in North American forests. Although S. noctilio has had a limited impact in North America to date, there is some concern that it could have a significant impact on pine plantations, especially in the southeastern U.S.A. and there are few data on the flight capacity of male S. noctilio. We found no association between parasitism by D. siricidicola and whether or not S. noctilio initiated flight. Male wasps that were parasitized by nematodes were heavier than non-parasitized males, but there was no significant difference in mass between parasitized and non-parasitized females. We also examined the flight capacity of male and female S. noctilio in relation to nematode parasitism, body mass, temperature (for only males), and diel period. Body mass, temperature, and diel period affected flight in S. noctilio such that wasps were generally observed to fly faster, farther, and/or more frequently if they were heavier, flying at warmer temperatures, and flying during the photoperiod. The fact that nematode-parasitized male wasps were found to fly farther than the non-parasitized males is consistent with the hypothesis that nematode parasitism does not negatively affect the flight capacity of S. noctilio. 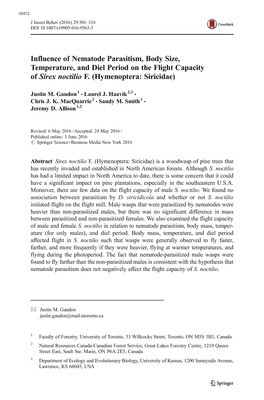