In 2011, Anderson, Pankratz and Mooney provided a thermodynamic solution for predicting the penetration height of smoke plumes. Using the energy of the fire as input, they predicted the height of a column of air mixed from the environmental lapse rate to a dry adiabatic lapse rate, with the top of the column captured by the height of thermal equilibrium.

This paper outlines a smoke plume study being conducted by Alberta Environment and Sustainable Resource Development together with Environment Canada, which uses hand-held inclinometers and photographs taken by wildfire lookout observers to measure smoke plume heights. Observations of 85 plumes collected by 13 towers from 2010 to 2013 are presented. These are compared with the predicted heights based on the thermodynamic approach and the Briggs model, currently used in the BlueSky modelling framework.

The smoke from wildland fires carries chemicals into the air, and can affect not only the atmosphere and air quality near the fire, but also the weather and long-term climate. To understand how emissions from wildland fires are transported in the atmosphere, it is important to know how high the plumes of smoke rise. The approach currently used to predict plume height dates from 1965 and is based on emissions from tall chimneys, which may be different from wildfires. The authors of this study recently developed a new mathematical model to predict the height of smoke plumes. In this conference paper, they test this model by comparing smoke-plume observations collected during wildland fires by the province of Alberta with predictions from their model and from the older, chimney-based model. They found that their model came much closer to actual observations than the older model. The new model is simple and effective and can be easily added to existing smoke forecasting systems. 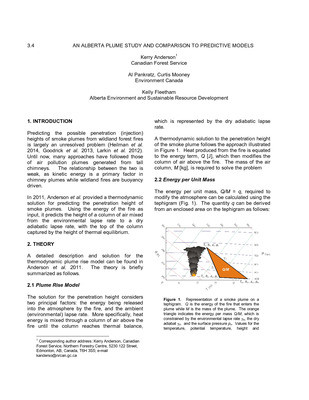