Abstract In Canadian forests, the majority of burned area occurs on a small number of days of extreme fire weather. These days lie within the tail end of the distribution of fire weather, and are often the periods when fire suppression capacity is most challenged.We examined the historic and future frequency of such extreme fire weather events across 16 fire regime zones in the forested regions of Canada from 1970 to the year 2090. Two measurements are used to measure the extreme fire weather events, the 95th percentile of Fire Weather Index (FWI95) and the number of spread days. The annual frequency of fire spread days is modelled to increase 35–400 % by 2050 with the greatest absolute increases occurring in the Boreal Plains of Alberta and Saskatchewan. The largest proportional increase in the number of spread days is modelled to occur in coastal and temperate forests. This large increase in spread days was found despite a modest average increase in FWI95. Our findings suggest that the impact of future climate change in Canadian forests is sufficient to increase the number of days with active fire spread. Fire management agencies in coastal and temperate regions may need to adapt their planning and capacity to deal with proportionally larger changes to their fire weather regime compared to the already high fire management capacity found in drier continental regions.

We examined the effect of future climate change across Canada on the frequency of days when extreme weather allows for existing wildfires to spread at rates likely to overwhelm fire suppression activities (called spread event days). Such weather is typified by periods of high winds, high temperatures, and low humidity. Three different global models of future climate and three different scenarios of future carbon emissions were used. Unlike previous studies that examined future fire weather over large regions using a small number of representative weather stations, here we examined model outputs at a 3-km grid cell size to gain a finer scale perspective on how fire weather will change across Canada. Nearly all of the combinations of climate models and emissions scenarios indicated that the number of spread event days will increase across Canada. Our results suggest that future increases in extreme fire weather are likely because of climate change, no matter what future emissions trends take hold. The largest absolute increases in the number of extreme fire weather days per year are predicted to be in the areas already experiencing the highest frequency of large fires, namely Alberta, Saskatchewan, and the Northwest Territories. 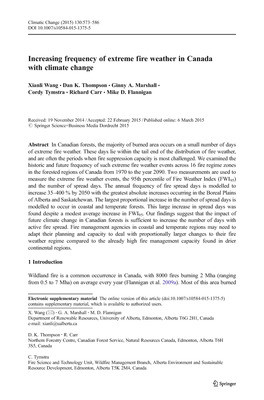