Wildfires are burning increasingly extensive areas of forest in Canada, reducing their capacity as carbon sinks. Here we compare the answers that four independent land cover datasets, produced from different satellite images (SPOT, Landsat, and MODIS), provide for the question of what burned in Canada in recent years. We harmonized the different datasets into a common, simpler legend consisting of three classes of forest (needle-leaf, broadleaf, and mixed) plus non-forest, and resampled them to a common pixel size (250 m). Then we used annual maps of burned area to count, for each map and year from 2011 to 2014, the number of burned pixels of each class, and we tabulated them by terrestrial ecozone and Canada-wide. While all four maps agree that needle-leaf forest is the most frequently burned class in Canada, there is great disparity in the results from each map regarding the proportion of burned area that each class represents. Proportions reported by one map can be more than double those reported by another map, and more than four times at the ecozone level. We discuss the various factors that can explain the observed discrepancies and conclude that none of the maps provides a sufficiently accurate answer for applications such as carbon accounting. There is a need for better information in areas lacking forest inventory, especially in the vast unmanaged forest of Canada.

Wildfires increasingly burn large areas of forest in Canada, and this decreases the forests’ capacity to reduce global warming. To estimate greenhouse gas emissions from wildfires, it is important to know what type of forest burned. We reviewed and compared four independent data sets of broad forest types in an effort to find out what burned in Canada in recent years. We compiled different data sets with Canada-wide annual maps of burned area for the years 2011–2014 into a common collection with four broad categories (non-forest, needle-leaf forest, broadleaf forest, and mixed forest). We compared the estimates from each data source to see if the results were consistent. While all four maps showed that the needle-leaf forest was the most frequently burned forest in Canada, there were big differences in the proportions reported on different maps, and the differences were worse at the ecozone level. Classification errors account for many of the differences, which vary from place to place and tend to be more frequent in more diverse areas. There is a need for better information in areas lacking forest inventory data, especially in the vast unmanaged forest of Canada. 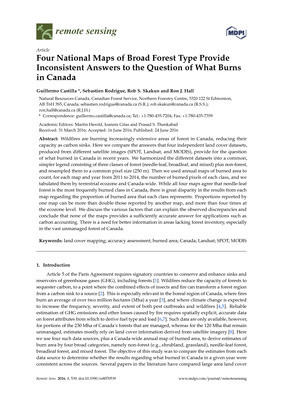