Quantifying fire regimes in the boreal forest ecosystem is crucial for understanding the past and present dynamics, as well as for predicting its future dynamics. Survival analyses have often been used to estimate the fire cycle in eastern Canada because they make it possible to take into account the censored information that is made prevalent by the typically long fire return intervals and the limited scope of the dendroecological methods that are used to quantify them. Here, we assess how the true length of the fire cycle, the short-term temporal variations in fire activity, and the sampling effort affect the accuracy and precision of estimates obtained from two types of parametric survival models, theWeibull and the exponential models, and one non-parametric model obtained with the Cox regression. Then, we apply those results in a case area located in eastern Canada. Our simulation experiment confirms some documented concerns regarding the detrimental effects of temporal variations in fire activity on parametric estimation of the fire cycle. Cox regressions appear to provide the most accurate and robust estimator, being by far the least affected by temporal variations in fire activity. The Cox-based estimate of the fire cycle for the last 300 years in the case study area is 229 years (CI95: 162–407), compared with the likely overestimated 319 years obtained with the commonly used exponential model.

Fire is part of the natural dynamics of Canada’s boreal forest. In eastern Canada, researchers most often use survival analyses to determine the frequency of fires.

In this study, researchers compared three survival models (the Weibull model, the exponential model and the Cox regression model). They also compared the results obtained during a simulation of the real conditions observed in the field in eastern Canada. The Cox model was found to be most realistic in determining fire frequency. A more accurate estimation of fire frequency would help improve wood supply planning for the industry. 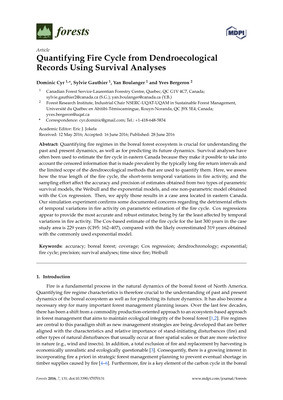