Forests are important sources of livelihoods to millions of people and contribute to national economic development of many countries. In addition, they are vital sources and sinks of carbon and contribute to the rate of climate change. The UN Food and Agriculture Organization has been collecting and presenting data on global forest resources and forest cover since 1948. This paper builds on data from FAO’s 2015 Global Forest Resource Assessment (FRA) and presents information on growing stock, biomass, carbon stock, wood removals, and changes of forest area primarily designated for production and multiple use of the world’s forests. Between 1990 and 2015, the total growing stock volume has increased in East Asia, Caribbean, Western and Central Asia, North America, Europe (including the Russian Federation), and Oceania with the highest relative increase in East Asia and the Caribbean. In all other subregions the total growing stock volume decreased. North and Central America, Europe and Asia report forest C stock increases while South America and Africa report strong decreases and Oceania reports stable forest C stocks. The annual rate of decrease of forest C stock weakened between 1990 and 2015. The total volume of annual wood removals including woodfuel removals increased between 1990 and 2011, but shows a remarkable decline during the 2008–2009 economic crisis. Forest areas designated for production purposes differ considerably between subregions. The percentage of production area out of total forest area ranges between 16 percent in South America and 53 percent in Europe. Globally about one quarter of the forest area is designated to multiple use forestry. The balance between biomass growth and removals shows considerable sub-regional differences and related implications for the sustainable use of forests.

The Food and Agriculture Organization (FAO) of the United Nations has been monitoring the world’s forests since the 1940s. Their latest global Forest Resources Assessment (FRA) was released in September 2015 at the World Forestry Congress. The new FRA data report that there are 530 billion cubic meters of wood in the world’s forests. This is 3.6 billion cubic meters (~1%) more than in 1990. Forest volume increased in 6 out of the 12 global sub-regions (including North America) but decreased in the other 6. The new FRA data also report that forest carbon stocks declined by over 13 billion tonnes since 1990. During this same period, however, other studies report that the world’s forests were a carbon sink (they soaked up carbon from the atmosphere). The paper explains how it is possible to have these two apparently contradictory findings. First, not all carbon soaked up by forests remains in forests; some is transferred to wood products or aquatic systems. Secondly, there remains a lot of uncertainty about how much carbon is in tropical forests and how much carbon these forests are soaking up when not disturbed. This uncertainty has important implications for global climate change mitigation policy. Wood removals (harvesting) from the world’s forests increased since 1990 with a clear but short-lived decline following the 2008 economic crisis. Most of the world’s wood removals occur in high income countries while most of the world’s wood-fuel removals occur in lower income countries. 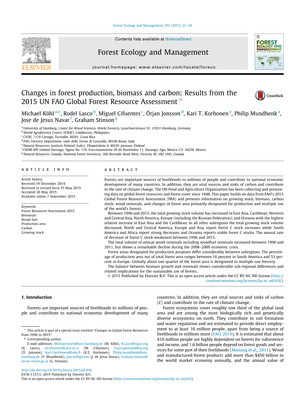