The chemical which is the focus of this work is a surfactant used in the preparation of some commercial formulations of the herbicide glyphosate. Based on many previously published studies, it is known to be the primary toxicant for aquatic organisms which might be inadvertently to such formulated glyphosate. In this study, testing under standard laboratory protocols was undertaken to assess the relative acute toxicity of this surfactant to various aquatic organisms, including four benthic invertebrates, two zooplankton species and four fish species. Results were integrated with previously published acute toxicity data for aquatic organisms in an overall species sensitivity distribution analysis. Results show only moderate levels of hazard relative to potential worst-case exposure scenarios, with relatively low levels of hazard based on more environmentally realistic exposures. In natural aquatic systems, sorption and degradation of the compound in water and sediments is known to further reduce exposure magnitude and duration, thus mitigating potential risk to aquatic organisms. This work contributes detailed scientific information pertaining to potential environmental risks associated with glyphosate-based herbicides which are the dominant herbicide products used in Canada as part of integrated vegetation management strategies designed to enhance forest regeneration following harvest. 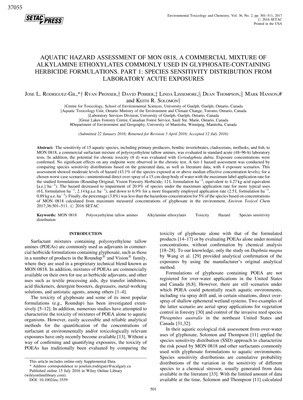