Reservoir creation, a prevalent mechanism for deforestation, coupled with persistent harvest activity, can significantly affect the carbon (C) budget of a landscape. The objective of this study was to assess the impact of successive reservoir expansion and forest harvest events over a 100-year period on a watershed-scale terrestrial C budget. Using a spatially-explicit version the Carbon Budget Model of the Canadian Forest Sector 3 (CBM-CFS3), and a compiled forest cover disturbance geodatabase, C stocks and stock changes were analysed for the Sooke Lake watershed near Victoria, British Columbia, Canada. Over the study period, of the 7943 ha of forest modeled, 2430 ha was cut and replanted and 640 ha deforested. In 1910 the watershed was dominated by mature/old Douglas-fir forests with average aboveground biomass of 258 Mg C ha-1 across the watershed. Deforestation occurred as a result of reservoir expansion between 1911 and 1915. The effect of deforestation as well as fires and localized, intensive harvest from 1920 to 1940 on what were private forestlands in the north and south east of the watershed, reduced aboveground biomass to an average of 189 Mg C ha-1. Distributed harvesting between 1954 and 1998 and two additional reservoir expansions resulted in a study-period minimum aboveground biomass value of 148.7 Mg C ha-1 in 1991. By 2012 aboveground biomass had begun to recover (177.9 Mg C ha-1). Even though land clearing for reservoir expansion had occurred again in 2002, cessation of logging activities since the mid-1990s has resulted in a recovery of aboveground C stocks. Yet, total ecosystem C stocks will not reach pre-disturbance levels until 2074 given current management practices. This research highlights the long-term implications of past management practices on future C stock recovery. Conclusions drawn from the retrospective C budget could apply to other landscapes that have undergone similar recursive deforestation events paralleled by forest harvest disturbances.

A 100 year historic forest carbon budget for the Sooke Lake watershed was developed using the Carbon Budget Model of the Canadian Forest Sector 3. The ~8000ha watershed is the main water supply area for Greater Victoria. Historic forest cover maps, air photos, and current forest cover and LiDAR data were assembled into a GIS to investigate C stock and C flux impact of historic forest disturbances including fire, deforestation due to reservoir expansion, and multi-decadal forest harvest activity from 1912 – 2012. Biomass C stocks declined from 258 to 189 MgC/ha from 1911 to 1940 due to fires, logging and deforestation, to 149 MgC/ha in 1991 after a period of sustainable logging, and recovered to 178 MgC/ha in 2012 with cessation of logging even though the reservoir was expanded in 2002. Projected C budgets from 2013 to 2112 showed that biomass and ecosystem C stocks recovered to 1911 levels by 2074. The paper illustrates novel application of historic and LiDAR data in developing forest C budgets and highlights the impact of historic land management decisions on C stock recovery, a major consideration when evaluating future forest management strategies. 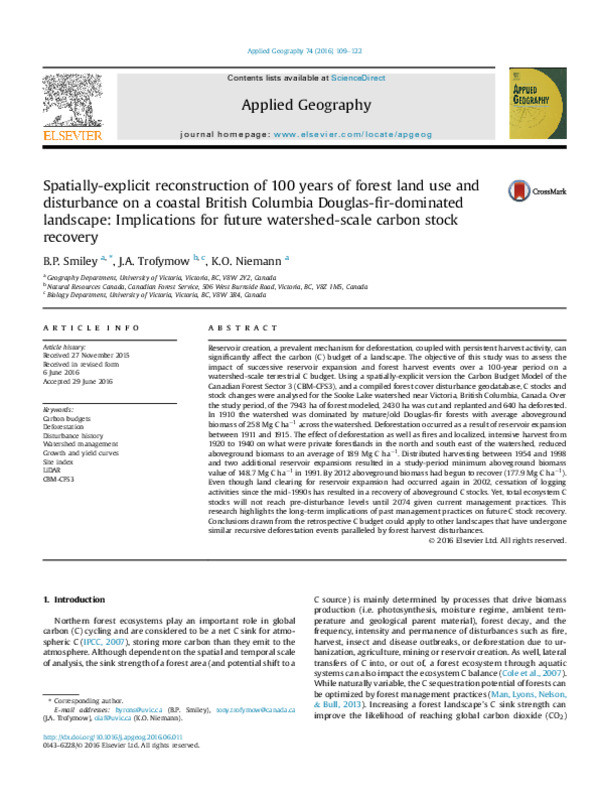