Context Forest landscapes at the southern boreal forest transition zone are likely to undergo great alterations due to projected changes in regional climate.

Objectives We projected changes in forest landscapes resulting from four climate scenarios (baseline, RCP 2.6, RCP 4.5 and RCP 8.5), by simulating changes in tree growth and disturbances at the southern edge of Canada’s boreal zone.

Results Climate-induced changes in the competitiveness of dominant tree species due to changes in potential growth, and substantial intensification of the fire regime, appear likely to combine in driving major changes in boreal forest landscapes. Resulting cumulative impacts on forest ecosystems would be manifold but key changes would include (i) a strong decrease in the biomass of the dominant boreal species, especially mid- to late-successional conifers; (ii) increases in abundance of some temperate species able to colonize disturbed areas in a warmer climate; (iii) increases in the proportions of pioneer and fire-adapted species in these landscapes and (iv) an overall decrease in productivity and total biomass. The greatest changes would occur under the RCP 8.5 radiative forcing scenario, but some impacts can be expected even with RCP 2.6.

Conclusions Western boreal forests, i.e., those bordering the prairies, are the most vulnerable because of a lack of species adapted to warmer climates and major increases in areas burned. Conservation and forest management planning within the southern boreal transition zone should consider both disturbance- and climate-induced changes in forest communities.

In this study, the researchers used four climate change scenarios to show that over a 300-year span, western Canada’s boreal forest would be more vulnerable to climate warming than its eastern counterpart. Based on these models, this vulnerability would mainly be explained by the absence of plant species that are adapted to a warmer climate and by a significant increase in burned areas in this region due to climate change.

The scenarios showed that climate warming would provoke changes in tree species by modifying their growth potential and by intensifying fires. These changes would lead to reduced volumes, perhaps even the disappearance, of species that currently dominate the forest (spruce and fir). They would also result in the increased presence of species that are adapted to warmer temperatures and disturbances (red maple, white pine) and of pioneer tree species as well as species that adapt to fire (poplar, jack pine). Furthermore, these changes would cause a drop in the productivity and total biomass of these forests. 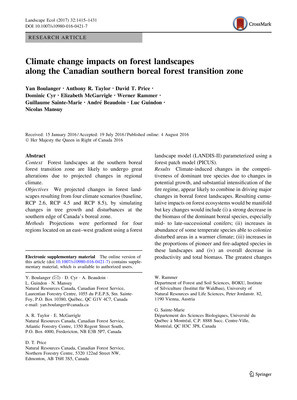