Severe crown fires are determining disturbances for the composition and structure of boreal forests in North America. Fire cycle (FC) associations with continental climate gradients are well known, but smaller scale controls remain poorly documented. Using a time since fire map (time scale of 300 years), the study aims to assess the relative contributions of local and regional controls on FC and to describe the relationship between FC heterogeneity and vegetation patterns. The study area, located in boreal eastern North America, was partitioned into watersheds according to five scales going from local (3 km2) to landscape (2800 km2) scales. Using survival analysis, we observed that dry surficial deposits and hydrography density better predict FC when measured at the local scale, while terrain complexity and slope position perform better when measured at the middle and landscape scales. The most parsimonious model was selected according to the Akaike information criterion to predict FC throughout the study area. We detected two FC zones, one short (159 years) and one long (303 years), with specific age structures and tree compositions. We argue that the local heterogeneity of the fire regime contributes to ecosystem diversity and must be considered in ecosystem management.

In this study, the researchers showed that it should not be systematically presumed that the fire cycle (i.e., the number of years separating two successive fires) is the same (homogeneous) throughout a given territory. To do so, they adapted the concept of fire cycle to make it relevant to subregions where fire cycles are different (heterogeneous). 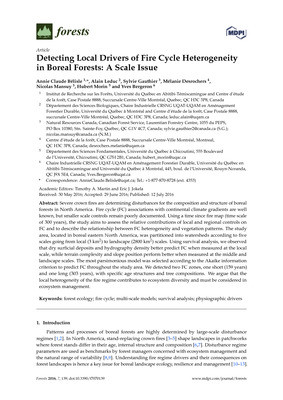