We evaluated the use of fluorescent powders for tracking dispersal by the emerald ash borer, Agrilus planipennis Fairmaire (Coleoptera: Buprestidae), of Beauveria bassiana isolates froman autocontamination device. Neither of the two DayGlow powders tested (Arc Yellow and Aurora Pink) interfered with fungal germination or growth, nor did they affect survival of beetles in the laboratory, or affect virulence of the fungus. The powders persisted at least 10 days out-of-doors on dead beetles in sticky band traps, and at least 14 days on pouches inside autocontamination traps. During field trials of autocontamination traps with powder-dusted fungal pouches in southwestern Ontario, 8.0% of the 4010 beetles captured in green prism and sticky-band traps were positive for fluorescent powders. Only half (46.2–57.8%) of the powder-positive beetles actually carried viable fungal conidia, as determined by plating of beetle rinses, possibly as a result of patchy growth of fungal isolates and reduced conidia production on pouch surfaces during the 16-day trapping experiment. The presence of viable conidia (either one or both isolates) on about 10% of beetles that did not carry any visible powder particles may be an indication of horizontal transmission of the fungus by beetles that had visited the autocontamination traps. 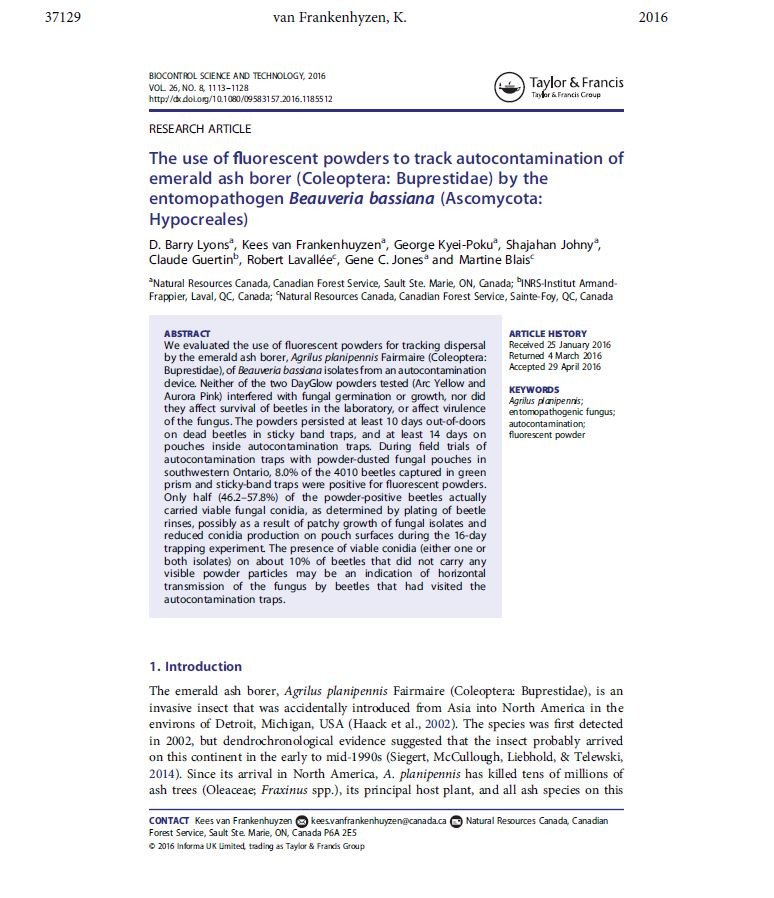