Female emerald ash borers emit a pheromone that increases field trap captures on large-panel prism traps when co-emitted with a green ash leaf volatile. We assessed attraction to these compounds by using visual decoy-baited branch traps, which attract males by mimicking a living female resting upon a leaf. Male captures were positively affected by the presence of decoys and the emission of either pheromone or tree volatiles. The decoy-baited traps with the combination of tree volatiles and pheromone caught more males than any other treatment. Greater male captures were associated with continuing captures later in the season, suggesting that decoy and odor attractants remain attractive throughout the flight period. Female captures were not affected by the visual decoys, but odors did influence captures. The rare female trap captures were negatively correlated with the more common male captures on the odorless and tree volatile-baited traps, but were not correlated with male captures when the pheromone was added. Thus, in the absence of the pheromone, the visual signal of other conspecifics can inhibit female attraction. However, the pheromone attracts both sexes independently of the visual signal on the trap. 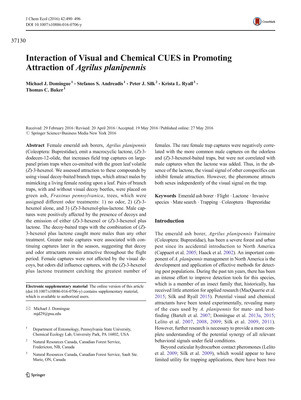