Climate-influenced changes in fire regimes in northern temperate and boreal regions will have both ecological and economic ramifications. While a number of studies have projected increases in area burned under climate change, few have explored the implications of this for future wildfire suppression costs. We address this issue using a recently compiled historical (i.e., 1980-2009) fire cost database for Canada. A two-stage approach was used, with area burned modelled as a function of a climate moisture index (CMI) and fire suppression costs then estimated as a function of area burned. Future estimates of area burned were generated from projections of the CMI under two emissions pathways for four General Circulation Models (GCMs); these estimates were constrained to ecologically reasonable values by incorporating a minimum fire return interval of 20 years. Total average annual national fire management costs are projected to increase to just under $1 billion (a 60% real increase from the 1980-2009 period) under the low greenhouse gas emissions pathway and $1.4 billion (119% real increase from the base period) under the high emissions pathway by the end of the century. For many provinces, annual costs that are currently considered extreme (i.e., occur once every ten years) are projected to become commonplace (i.e., occur once every two years or more often) as the century progresses. It is highly likely that evaluations of current wildland fire management paradigms will be necessary to avoid drastic and untenable cost increases as the century progresses. 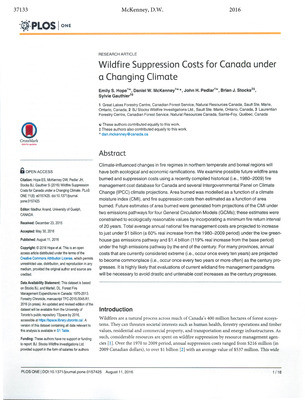