We examined modulus of elasticity (MoE) derived from SilviScan in white spruce (Picea glauca (Moench) Voss) at the site, tree, and ring levels across the Boreal Plains ecozone in Canada. Area-weighted averages of MoE were calculated for juvenile and mature wood and were examined in relation to radial growth, climate, and location. Correlations indicated that there was a negative relationship between radial growth and MoE in the juvenile wood that was detectable at the site and tree levels; however, the relationship weakened in the mature wood, particularly at the site level. Few climate variables were correlated with MoE in juvenile wood, whereas multiple summer and fall climate variables showed a significant correlation with MOE in mature wood. A model describing the radial profile of MoE explained 58% of the variability in MoE, with 10% of the random variability attributed to between-tree differences. Elevation and summer water balance accounted for nearly all of the betweensite variability. A decrease in MoE with increasing elevation was noted and has been previously linked to a decrease in cell wall thickness due to a shorter growing season at higher elevations. Integration of the MoE profile model into an individual-tree growth and yield simulator is the next logical step.

Wood stiffness is important in wood quality and in determining the grade of lumber products. It is measured by the modulus of elasticity (MoE), where the larger the MoE value, the stiffer the wood. White spruce is one of the main sources of lumber in Canada, particularly in the boreal forest regions. Forest managers need information about the variation of wood stiffness in the forest and how to avoid any management measures that would reduce stiffness. We studied the differences in MoE in white spruce trees from 25 sites across the western boreal forest, from a range of forest ecotypes and elevations. We found that MoE decreased as growth rate increased. However, this was apparent mostly in the juvenile core of the trees, and less in the mature outer wood. MoE in mature wood was more affected by climate conditions, which had little influence on MoE in juvenile wood. We made a mathematical model that explained 58% of the variation in the radial profile of MoE in any tree. The factors used in the model were growth rate, number of tree rings, elevation and summer water balance. This model can be used with computer simulation of tree growth and lumber yield to provide forecasts of wood stiffness along with yield. These will help forest managers plan future operations to maximize production of high-grade lumber from white spruce. 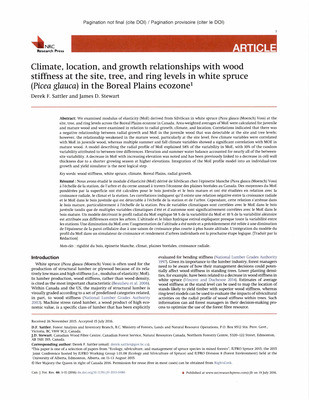